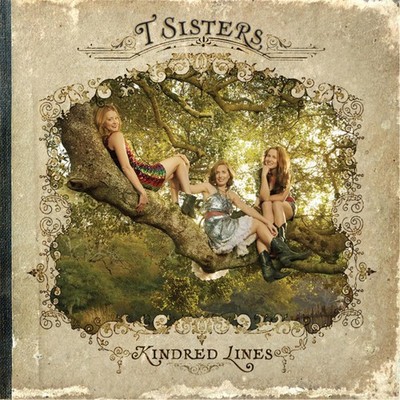 Folk at heart, the T Sisters also draw heavily on elements of country, gospel, R&B, and fellow sibling bands like The Andrews Sisters and The Beach Boys. Produced and mentored by bluegrass legend Laurie Lewis, their debut album Kindred Lines is being released by Lewis' record label Spruce and Maple Music. "Laurie Lewis, besides modeling beautiful playing and inspired songwriting," say the sisters, "has lent us her vision of how to be an artist: to be led by the music and the songs themselves." For Kindred Lines, the T Sisters enlisted a cadre of experienced musicians like Todd Phillips (Ricky Skaggs, Joan Baez, Alison Krauss), Linda Tillery (Buckwheat Zydeco, Bobby McFerrin), and Mike Marshall (Edgar Meyer, Béla Fleck, Sam Bush). As these stellar musicians weave in and out of the music, where the T Sisters truly shine is their a cappella harmonies. "The experience of singing in harmony sans instruments-that ability to hear and dig in to the way our voices resonate together-is particularly powerful for us." Like the sirens of old, the harmonies of the T Sisters draw the listener ever closer, hinting at a deeper, more dangerous beauty. It's a sound that's even got luminaries like Linda Ronstadt raving! Kindred Lines almost reads like a book or a stage play; there's a theatrical sense of narrative rhythm and movement. It is a coming-of-age story chronicling a season of life that leads from youth ("You Don't Know," "Seduction of Spring") through disillusionment and loss of innocence ("Train Wreck") to maturity ("The Wind"). At the core of the album is the song "Molasses," exploring the importance of family roots. The final act of the album is a chillingly beautiful a cappella rendition of Paul Simon's "American Tune." With it, there's a feeling of closure to the album, the kind of feeling that comes as you move through each major phase of life, wrapped in family roots but looking forward to a new future. With Kindred Lines, the T Sisters stand tall. Their timeless sibling harmonies intertwine with Americana and folk influences, forming a testament to family, musical traditions, and sisterly creativity nurtured since childhood. But underneath this canopy of tradition and family there's a swift undercurrent of brazenly sassy fun and playful theatricality. With roots this deep, the T Sisters will be around for a while. "I was really delighted with their sound, which reminded me of the Andrews Sisters back in the 1940s. The interplay of their voices is just pure delight." -Chris Strachwitz, Arhoolie Records.

Here's what you say about
T Sisters - Kindred Lines.