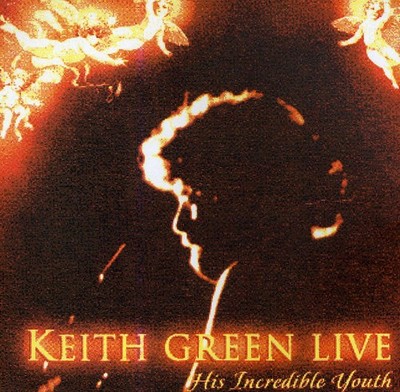 Keith Green took to music at a young age, and his talents were noted by major newspapers by the time he was only eight years old. Following a performance of Arthur Laurents' The Time of the Cuckoo, the Los Angeles Times wrote that 'roguish-looking, eight-year-old Keith Green gave a winning performance,' one that 'stole the show'. Green went on to play 'Kurt Von Trapp' in a major production of The Sound of Music. At the age of eleven, Green became the youngest person ever to sign with the American Society of Composers, Authors and Publishers (ASCAP) when he published, recorded and released the song 'The Way I Used to Be'. In his early teens, with more than 50 original songs under his belt, Green was signed to Decca Records. Decca had plans to make Green a teen-idol, regularly getting the young man featured in fanzines like Teen Scene and on popular television shows like The Jack Benny Show and Steve Allen's show. Time Magazine called Green 'a prepubescent dreamboat'. His dreams of stardom were shattered, however, when Donny Osmond stole his short-lived spotlight and Green was quickly forgotten. By his mid-teens, Green became heavily involved in drug use, eastern religion, astrology, and mysticism. After experiencing a really horrifying 'bad trip', he abandoned drug use and also became bitter towards philosophy and theology in general. In the midst of his skepticism, as Green described it, God's love 'broke through' his 'calloused heart'. He began on a new path 'with Christ as his guru', but had many 'spiritual struggles' and hardships along the way. He married his wife Melody in 1973, and the two became involved in the Vineyard fellowship in Southern California, where they were introduced to Bob Dylan. The Greens began an outreach program to their community by purchasing two homes (and renting five) to provide housing and care for prostitutes, drug addicts, and homeless people. Eventually, the couple and the rest of their group relocated to Lindale, Texas, where the Greens founded Last Days Ministries.

1) Stay on the Path
2) Everybody's Rapin' Mother Nature
3) Whatcha' Gonna Do Now?
4) Letteers to Mother (From the Road)
5) We're All in This Together
6) Love All Your Animal Friends
7) War Games
8) Haircut
9) Encore
10) Keith Green's Legacy Lives on This Album of Soul-Stirring Live Performance of His Songs Recorded at a College Concert
11) Keith Green's Music Was on the Cutting Edge-Energetic Excitement That Pierces the Heart