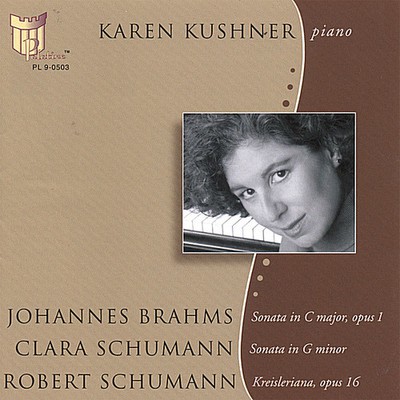 Karen Kushner Since receiving degrees from Northwestern University (BM, 1980) and the Juilliard School (MM, 1982), Karen Kushner has been active as a piano soloist and chamber player. Performances include Weill Recital Hall at Carnegie Hall, Ethical Culture Chamber Series, Trinity Church Concert Series, Music at Wave Hill, Kosciuszko Foundation, Chopin Foundation and United Nations in New York City; National Gallery of Art and Phillips Collection in Washington, D.C.; Isabella Stewart Gardner Museum in Boston; Temple Square Series (Salt Lake City); Dame Myra Hess Memorial Concert Series in Chicago; and Friends of Music of Fairfield County, Connecticut. She has performed and given master classes at colleges and conservatories in the United States. Summer performances have included Spain (International Festival of Deià in Mallorca), France (L'Académie Internationale d'Été in Nice), Poland (Music in Old Krakòw) and, in the United States, the festivals at Aspen, Newport, Ravinia, Festival of the Atlantic (NJ), Skaneateles Festival (NY), and Strings in the Mountains (CO). She has been interviewed and featured on such radio stations as New York's WQXR, WNCN, and WNYC, Chicago's WFMT, and Boston's WGBH and WBUR, Pittsburgh's WQED, and WGTS, in Washington, D.C. Kushner, currently Associate Professor of Piano at the Conservatory of Music at the University of Missouri, Kansas City, previously taught at the Mannes College of Music as well as at Turtle Bay Music School in New York City. Her own teachers have included Jerome Lowenthal, Jeanne-Marie Darré, Russell Sherman, Herbert Stessin, and at Juilliard, Adele Marcus and William Masselos. She is a member of the New York Musicians' Club, Music Teachers' National Association and the College Music Society. She is sought after as a writer of articles and book reviews (Clavier Magazine), program notes (Carnegie Hall), and liner notes (VAI and Albany Records). Kushner toured internationally with the late Igor Kipnis as a member of the Kipnis-Kushner Duo, and their recordings can be found on the Parnassus and Palatine labels. Her solo two-CD debut recording of the complete Chopin Mazurkas for the Connoisseur Society was received with the greatest critical acclaim and has been highly recommended by such periodicals as Newsday, the New York Daily News, Fanfare, and Stereophile. She subsequently recorded music of Brahms, Chopin, Mendelssohn, Schumann and Liszt for Epiphany Recordings, and music of Kevin Oldham for VAI and Albany Records.

Here's what you say about
Karen Kushner - Works for Piano.