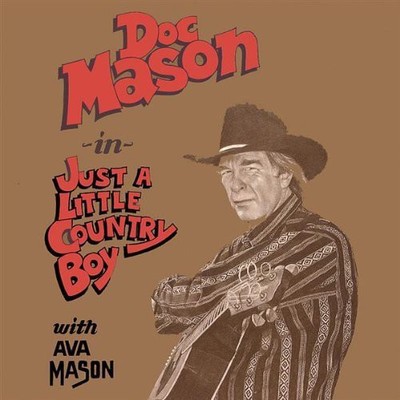 Doc Mason, in a nutshell, is A Texas Native Son, who began playing and singing after he was given a Gibson guitar as a Christmas gift by his parents when he was 20 years old. It did come with the stipulation that he must play Christmas carols the following year. Mission was accomplished! During his 'Growing up Years' spent in Vernon, Texas, our in time to be songwriter was exposed to a wide variety of music 'piped' throughout the family's middle class home, down little copper wires from the living room Hi-Fi. From Hank Williams to Dean Martin to Marty Robbins to Broadway Show Tunes, influences were many, but it was while attending Medical School in Galveston, Texas from 1972-1976, that the future 'Doc' Mason was introduced to Willie Nelson's music, once more, by his parents. Doc would be the first to tell you that the music of Willie and Waylon as well as other songwriters of the time, served to help maintain a sense of sanity during some stressful times. It was music with meaning and when need be, attitude. The desire to continue to play and sing grew. My how time flies! In the mid-1980's, Doc began to write his own songs and penned the ones on 'Just a Little Country Boy,' which was recorded in 1993, to be finally released in, yes, 1994. These things often take time. Daughter, Ava, was 16 years old at the time of the recording. Another earlier recording project of Doc's original music entitled 'We Got Our Dancin' Shoes On,' was done in 1990. Both were self-produced and one might add, self-promoted. Heck, one man may not be able to do everything, however I do know one man who would like to give it a go. Plan is to release 'Dancin' Shoes' as a CD in the sometime near future. Meanwhile the music is and will remain timeless. Busy working as an ER physician for the past 23 years, the Good Doctor has been known to sing to his patients while sewing up their wounds. It could be said that from the pages of life, from the depths of the heart, the songs come. In 1996, Doc again experienced 'That Inspiration' to write, and events of recent times have brought to light what he feels to be some of his most soulful, as well as timely works. A current recording project is well underway but will not be rushed so as to be sure it is right. In the meantime, thank you for your support. You will enjoy this offering to your soul kitchen. 'In the darkest of times, we find that Miracles are most easily seen.' Doc Mason (02-16-2004)

Here's what you say about
Doc Mason - Just a Little Country Boy.