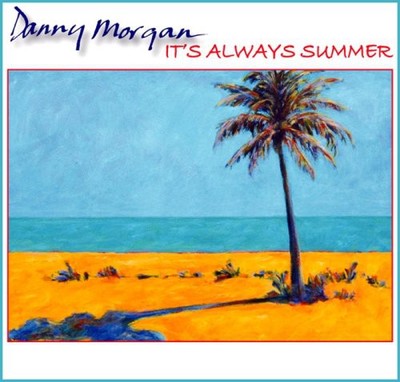 The truth is, when Ponce de Leon found the fountain of youth in St. Augustine Florida, he was on the wrong side of the Sunshine State! The real fountain of youth exists on the west coast starting at the southernmost point at Key West and heads north through the Gulf of Mexico up to Sanibel-Captiva Islands just off shore from Ft. Myers. Of course, we all know of Jimmy and his many tales of Margaritaville. Heck, it wasn't just a song; it became a restaurant, store, and record label - a legendary fantasy theme park! When Danny Morgan first arrived in SW Florida by van in the mid-seventies to play a two week gig at King's Crown on South Seas Plantation on Captiva, he knew little about where he landed and where it would take him. Was he really trading in his Fry boots for flip-flops? As Dylan says in the song My Back Pages, "ah but, we were so much older then, we're younger than that now", and, that speaks volumes for Morgan and his music. Just like Morgan's contemporary, Buffett, Danny and his music have left an indelible mark with his songs about the people, romance, dreams, lore and the magic of it all as referenced by author, Randy Wayne White, in his novels about the region. As modern troubadours go, Morgan is in a class by himself, and now, thirty something years later, he writes, collaborates and sings songs from his heart with verve as though he had just arrived on the islands for the very first time. Not unlike his previous offerings, THANK YOU FOR THE DANCE, BEACH LIFE and CAPTIVA MOON, Danny's new CD release, IT'S ALWAYS SUMMER, on Seagull Records, is what Morgan has always been about plus you get the bonus of his maturity and evolution as though time has stood still and moved on at the same time. He gets a little help from his friend, Livingston Taylor, in duet, on the co-written "LOVE IS FOR EVERYONE" and Liv's "THERE YOU ARE AGAIN." By the way, did I forget to mention that Danny leads off this album with an ala tropical cover of Livingston's brother, James', "SUMMER'S HERE"? After the Taylor-made opening, just when you think it couldn't get any better, here comes a wonderful cover of Adrian Belew's "BIG BLUE SUN." Done in a style reminiscent of The Beach Boys (also pals of Morgan), Big Blue Sun catches that mood that we all feel when we know we've had a big sip of paradise. The only other cover on this collection is a splendid version of the standard "RED SAILS IN THE SUNSET." This recording is exquisitely co-produced with studio wizard and musical cohort John McLane. These songs, along with Danny's new originals, "LOVE OF A LIFETIME," "FEELIN' RIGHT AGAIN," "TARPON BAY," "WISH UPON A SEASHELL," "MUCKY DUCK BLUES," "SUNSET TIME" and "CAPTIVA COWBOY," all more than fulfill Danny's promise of taking you on another complete musical tour of the island wonderland he knows and loves where time almost stops; I know, I've been there. Stan Hertzman, December 2007.

Here's what you say about
Danny Morgan - It's Always Summer.