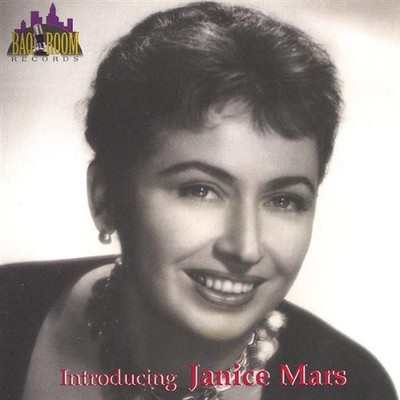 'A sparkling new CD that sounds like it was recorded a week ago. Here for a new generation of ears is this unique stylist's interpretations of 11 meticulously selected numbers from her long-ago nightclub act....If Sarah Bernhardt could sing, she would have been Janice Mars.' Rex Reed, New York Observer One of the most highly regarded -- and little known -- singers from Manhattan's golden nightclub era of the late 1950s, Janice Mars is being introduced 40 years after making her only recording. The proprietor and sole act at the infamous Baq Room on Sixth Avenue, Janice was notorious for attracting a celebrity clientele by 'singing with vast simplicity some of the best-put-together words you ever heard' (The New Yorker). Considered 'America's answer to Edith Piaf' by some, and described as a 'fractured mezzo' by the singer herself, Janice Mars' legend was largely word of mouth. In 1960 she went into the studio, and backed by some of New York's finest musicians, conductors, orchestraters and arrangers, created an album that not only showcased her unique talents but perfectly embodied a time and place. Unfortunately that time was over. The Baq Room, along with Sixth Avenue, was demolished to make way for the Avenue of the Americas and rock and roll was beginning it's domination of the music business. Janice's album was shelved and Ms. Mars would never sing professionally again. 40 years later the master recordings were found - in Marlon Brando's study - remastered on CD and are now available for the first time. For anyone who can appreciate a musical turn of a phrase, the brilliance of songwriters like Johnny Mercer, Duke Ellington, Yip Harburg and Harold Arlen or forgotten gems from Broadway musicals, Introducing Janice Mars is a must. 'Janice possesses a quality that is absolutely unique.' Tennessee Williams 'Hopefully, the long-overdue release of the CD Introducing Janice Mars will move her at last out of the footnotes and onto the main page, alongside more famous -- but no more talented -- names, where she rightfully belongs.' Michael Mascioli, Mr.Lucky.com 'It's a fascinating album - I don't think I've heard a better souvenir of ultra-chic, recherche East Side cabaret of the '50s.' James Gavin, author Intimate Nights The Golden Age of New York Cabaret.

Here's what you say about
Janice Mars - Introducing Janice Mars.