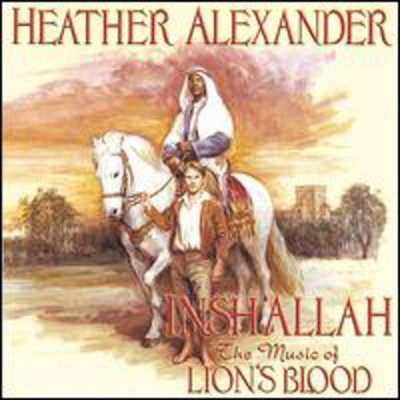 Heather Alexander is a fiery, redheaded Faerie Tale Minstrel who is known for singing the praises of the fae folk. She composes and performs original and traditional Celtic music on fiddle, guitar, bodhran and any other instrument that the sidhe may present to her. When not on tour, she makes her home in the countryside west of Portland, Oregon, with a menagerie of magical creatures including Kore the House Elf. More often, however, Heather is found performing solo up and down the West Coast or abroad, concentrating on venues between Portland and Seattle, or with her Celtic Folk and Mythic World Rock band, Uffington Horse. Whether solo or with the band, her spellbinding music is received with enthusiasm by audiences of all ages. Heather has published eight albums on her own label, Sea Fire Productions, including two live albums, four studio works, a "blooper" album and an Uffington Horse band album, "Enchantment." Her music with book tie-ins like "Insh'Allah: the Music of Lion's Blood," "Songsmith" and "Shadow Stalker" have assured her popularity at SciFi conventions, while her appearances at pubs, coffee houses, Folk Music Festivals and Highland Games have made her music available to the public at large. Her most recent release is a book tie-in with Irene Radford's series, "Merlin's Descendants," to debut in April 2006, and a second album of sea shanties, "Arms of the Sea," is due out in mid-summer 2006. She can be found on the Web at www.heatherlands.com.

Here's what you say about
Heather Alexander - Insh'allah: The Music of Lion's Blood.