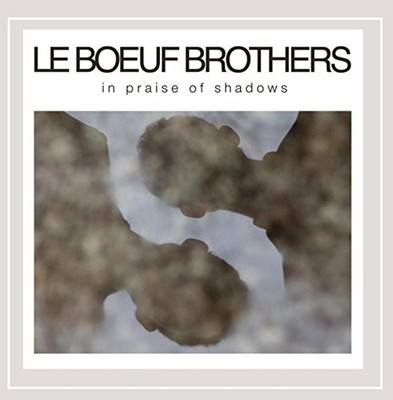 The Le Boeuf twins - saxophonist Remy and keyboardist Pascal - announce an ambitious step in their creative development with their new album, In Praise of Shadows. Joined by fellow twenty-somethings Mike Ruby on tenor saxophone, Nir Felder on guitar, Linda Oh on bass, and Henry Cole on drums, as well as the Myth String Quartet, the Le Boeuf brothers have created a work that spans the gulf of modern jazz with indie rock and intelligent electronic music. 'When Remy and I discussed the various possibilities for making this record, we agreed that we wanted to have our own 'sound',' Pascal explains. 'We decided to do this by incorporating elements outside of the jazz genre in our music.' For Pascal, who studied electronic music production at Berklee in the summers between his semesters at the Manhattan School of Music, this entailed using various sound design, sampling, and remix techniques; he cites Aphex Twin and Radiohead as examples. Indeed, on 'Everything You Love,' which features his own stark vocals, the majority of the track is constructed from sampled audio from elsewhere in the album. 'In jazz, there are many compositional devices that can create motion and communicate emotion with the listener,' Pascal elaborates. 'Similarly, there are compositional devices that can be used in electronic music. My goal in making this record is to bring these production-based compositional devices to the jazz genre and to encourage like-minded jazz musicians to do the same.' To facilitate this exchange, the CD of In Praise of Shadows includes both sheet music and audio stems of the recordings to remix, as well as a short video. For Remy, this meant adding the Myth String Quartet to various tracks, writing some of his arrangements after the initial recording sessions to incorporate the improvisations. 'What makes In Praise of Shadows different from our previous work is that we took a layered approach to composing, recording, and production,' Remy says, citing a specific example on 'Circles' that weaves composition and improvisation together in an intricate fashion. 'I decided to form aspects of the composition around the improvisation. When Pascal's comping moves outside the harmony during my solo, I decided to orchestrate the strings to follow this motion and bring it to the attention of the listener. In a sense, I got to accentuate my favorite parts of the solo by bringing them into the foreground. Every solo is a composition, but I decided to take this a step further.' The Le Boeuf twins namecheck a varied range of influences in the conception and creation of In Praise of Shadows. They look to Radiohead, a band that has indirectly shaped modern jazz repertory and aesthetic over the past 15 years, iconoclastic auteurs Sufjan Stevens and Björk, and envelope-busting electronic musicians Telefon Tel Aviv and Squarepusher for sonic inspiration. They feel a sense of kinship with texturally-minded modern jazz musicians such as Kneebody, Kurt Rosenwinkel and Aaron Parks. 'I think that many modern jazz and indie rock artists are trying to achieve a sense of individuality by breaking away from the traditions they are born out of,' Remy postulates. 'Both modern styles tend to favor more harmonic motion with less common chord progressions, and they embrace more textural variation. Modern jazz and indie rock appeal to a younger audience; I think the reason they are linked is because they speak to people of the same generation.' Pascal's own theory goes further: 'Due to the growing presence of music education, modern jazz seems to have taken on an atmosphere which tends towards intellectual influences. I feel this same way about electronic music, rock and music production. I want to hear music with emotional substance that is also nerdy enough to think about. My favorite albums incorporate honest emotional content, intelligence and creative production.' The Le Boeuf Brothers graciously acknowledge the support of the Edward & Sally Van Lier Fund of the NY Community Trust, which funded a significant portion of the creation of In Praise of Shadows. 'Pascal and I both feel quite fortunate and grateful to have had their support in actualizing our musical vision,' Remy says. Remy Le Boeuf - Alto Sax, Bass Clarinet, Tenor Sax Pascal Le Boeuf - Piano/Keyboards, Vocals Mike Ruby - Tenor Sax Linda Oh - Bass Henry Cole - Drums Nir Felder - Guitar * Adria Le Boeuf - Ambient Vocals ** Myth String Quartet: Tallie Brunfelt - Violin Jeremy Blanden - Violin ? Kim Uwate - Viola Isaac Melamed - Cello Produced by the Pascal & Remy Le Boeuf Electronic Production, Sound Design, & Remixing by Pascal Le Boeuf Electronic Production & Remixing on 'D2D' by Remy Le Boeuf Recorded by Andy Taub, Michael Marciano & Pascal Le Boeuf Mixed by Pascal Le Boeuf & Michael Marciano Mastered by Dave Darlington All compositions published by Le Boeuf Brother's Music (ASCAP) Graphic Design: Pascal Le Boeuf Photography & Videography: Adria Le Boeuf Publicity: Matt Merewitz / Fully Altered Media Label: Nineteen-Eight Records.

Here's what you say about
Le Boeuf Brothers - In Praise of Shadows.