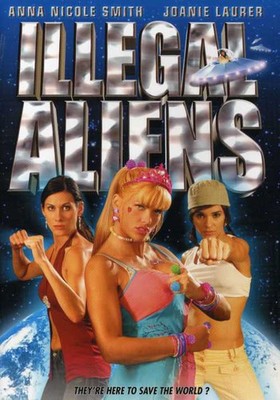 You thought they were from another planet... you were right! "Charlie's Angels" goes sci-fi, with a touch of "Men in Black" thrown in for good measure, when three aliens morph into super-hot babes and arrive to protect the earth from the intergalactic forces of evil. Guided by Syntax, their holographic mentor, these ILLEGAL ALIENS are willing to use every trick in the book and every sexy outfit in their wardrobe to accomplish their mission! This film is filled with high-energy action, lowbrow spoofs, and the high-camp acting reminiscent of the classic b-movie genre... how else could this film get away with Anna Nicole Smith saving the world? ILLEGAL ALIENS pokes fun at today's Hollywood and pays tribute to the so-called "bad movies" we all love to hate! The film stars Anna Nicole Smith (The Anna Nicole Show, Be Cool, Naked Gun 33 1/3: The Final Insult) as Lucy, Joanie Laurer (The Surreal Life, former WWE wrestler "Chyna") as Rex, Lenise Sorén (Eve, Nightmare), and Gladys Jimenez (TV's Tremors, the Bold and the Beautiful, the Young and the Restless) as Drew. Also starring are Patrick Burleigh (American Heiress, Days of Our Lives), Dennis Lemoine (Zombie Town, the Wayfarers), Mark 'Woody' Keppel (Icebreaker, Radical Jack), Michael J. Valentine (Pressure Point, Diamond Run), introducing Kevin McGuire and Kevin McGuire. The film was produced by Anna Nicole Smith, Kevin Rapf, Zorinah Juan (Zombie Town), Mary Beth French (Arachnia, Zombie Town), and associate produced by Daniel Smith.

Here's what you say about
Illegal Aliens.