Deb Callahan - If the Blues Had Wings 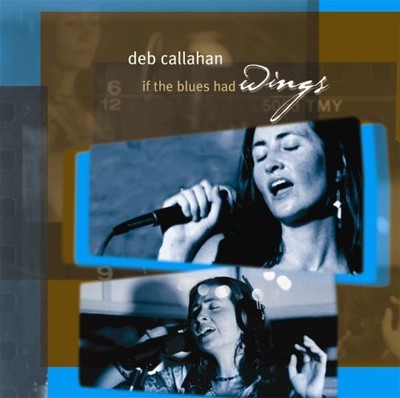 'This nearly flawless debut signals to the rest of the world what those in her home area know well: Deb Callahan is a major talent' Blues Revue Magazine She sings with all the authority of Ma Rainy or Janis Joplin, but it's her song-writing that sets her apart' Sing Out! Magazine 'Very impressive debut CD - She's fiery and bodacious' Baltimore Blues Rag 'Your emotional presence pours through the music like hot sauce on a twist of lime. Brad Litwin - blues musician 'Her voice was a burning barn, the mare screaming to escape, the doors blown out by the heat, the swallows spiraling into the night with billows of embers and ash. Her voice was the steam hovering over the charred foundation at day break, and the mare, galloping into the hills.' P. James - fan Blues and soul drenched vocalist and songwriter, Deb Callahan has been fronting her Philadelphia based band with passion and conviction since 1997. During that time she and her band have gained a reputation in the Pennsylvania, New Jersey, Delaware, Maryland and Washington DC area for an exciting live show featuring a mixture of blues, soul, rock, folk and jazz music. Deb hails from Boston, MA but has been living in Philadelphia for the past 12 years. She is most often compared to singers such as Bonnie Raitt, Janis Joplin, Susan Tedeschi and Lydia Pense from the late 60's San Francisco group Cold Blood. She cites her biggest vocal influences as Aretha Franklin, Tina Turner, Nina Simone, Billie Holiday, Stevie Wonder, Etta James, Bonnie Raitt, Rickie Lee Jones, Bessie Smith, Joan Osborne, Ray Charles, Al Green and Mavis Staples. During the past few years, Deb has focused on writing original material that retains the flavor of the music she loves, while mixing in contemporary experiences and sounds. Her newly released CD 'If the Blues had Wings' is the result of this effort. 'If the Blues had Wings' is a collection of primarily original material that combines funky New Orleans Rythms, exotic delta blues, gospel influenced blues and rock to create sultry, soulful blues music. The new CD features 11 original songs, a Bob Dylan cover and a few short outakes of songs written by female blues legends Memphis Minnie, Victoria Spivey and Edith Johnson. The CD was produced by guitar player Jon Dichter (Jive Five minus Two) and Callahan and recorded by Mike Comstock at Indre Studios in South Philadelphia. There was also some additional production/recording by Andy Kravitz of Brickhouse Productions and keyboard player Walter Runge. The songs were written by Callahan, Runge, and Dichter with a contribution from local bluesman Randy Lippincott. Musicians include band members Runge, piano, Robbertto Rickards, bass, Doug Masters, drums plus the talents of Billy Baltera and Allen James on guitars. Special guests include George Bonds (doing a duet with Callahan), Mike Brenner'Slo-Mo' on the dobro and Seth Holzman on harmonica.

Here's what you say about
Deb Callahan - If the Blues Had Wings.