Live Barefoot at the Symphony 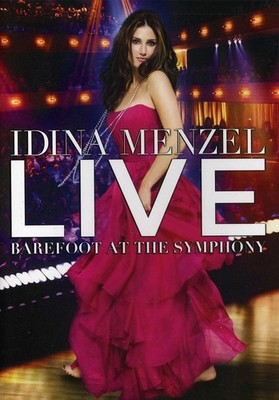 Idina Menzel has a diverse career on the stage, in films and television, and in music. The beloved Broadway star, best known for her work in the Broadway musical and film adaption of Rent, her Tony Award-winning performance as Elphaba, the green-faced Wicked Witch of the West in Wicked, and her recurring role in the hit TV series Glee, has spent much of the past two years crisscrossing the country, headlining with dozens of symphony orchestras. This past November, on the second-to-last stop on Menzel's 2011 itinerary, the star recorded her forthcoming PBS special Idina Live: Barefoot at the Symphony. On March 6th, Concord Music Group will release the accompanying DVD to that special. The special was captured in Toronto at Koerner Hall, a beautifully modernist, acoustically blessed, 1,100-seat space literally carved out of the city's historic Royal Conservatory of Music headquarters. Menzel performs with the 52-piece Kitchener-Waterloo Symphony, one of Canada's premiere symphony orchestras, under the direction of guest conductor Marvin Hamlisch (or as Menzel prefers to call him, the legendary Marvin Hamlisch) and her equally accomplished music director and pianist, Rob Mounsey (who has worked with everyone from Paul Simon and Steely Dan to Madonna, Usher and Rihanna). with the PBS special complete, Menzel plans to go back on tour this summer. She also hopes to return soon to Broadway for "a brand new, original show that I am not allowed to talk about, but really excites me." in addition, Idina's exemplary work continues with a BroaderWay, the foundation she established with husband Taye Diggs in 2010 to help inner-city girls find outlets for self-expression through arts-related programs.

Here's what you say about
Live Barefoot at the Symphony.