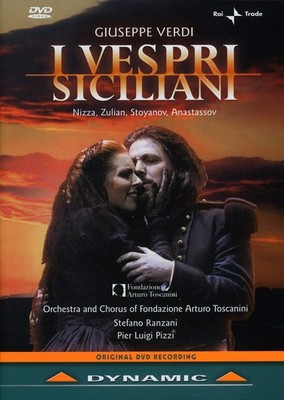 Les Vêpres siciliennes, a five-act opera on a libretto by Auguste Scribe and Charles Duveyrier with music by Giuseppe Verdi, was first staged at the Paris Opéra on 13th June 1855. The subject of the opera was nothing other than an adaptation of a libretto that Scribe had written some years before, Le Duc d'Albe. At first the opera was greeted with great success, even Hector Berlioz, usually far from kind to Italian musicians, exalted the grandeur of its conception and its masterly composition. However its Parisian success was to be short lived, and after 1865 Les Vêpres siciliennes disappeared from the repertoire of the Opéra. The Italian première, in Arnaldo Fusinato's translation, was held in Parma on the evening of 26th December 1855; shortly afterwards the opera was taken to La Scala in Milan, on 4th February 1856, but this time in a new translation by Ettore Caimi. Before definitively becoming I Vespri Siciliani in the Italian edition too, the opera circulated for some time under various titles. Les Vêpres siciliennes/I Vespri Siciliani is in many senses an intimist opera, all based on the contrast between the duties imposed on, and sorrowfully accepted by, all the leading characters by their political roles, and their private feelings which, of course, do not correspond to the demands of politics. All of this set against the backdrop of a very demanding stage and choral set-up. Filmed by RAI at Teatro Verdi in Busseto, main interpreters of this production are Vladimir Stoyanov (Monforte), Renzo Zulian (Arrigo), Amarilli Nizza (Elena) e Orlin Anastassov (Procida), under the baton of Stefano Ranzani and with the direction of Pier Luigi Pizzi.

Here's what you say about
I Vespri Sicilliani.