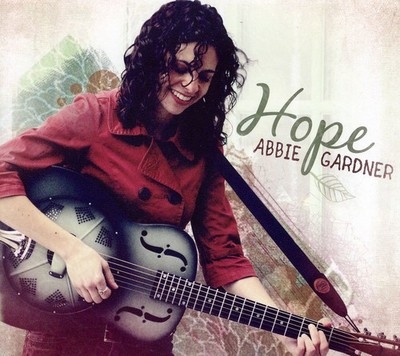 'Abbie Gardner shows her prodigious writing chops in her new album, Hope. Tales of love and loss, both gritty and sweet, ride the back of her by-now familiar, formidable slide guitar licks. She channels Lucinda and Bonnie, but remains pure Abbie.' - Richard Cuccaro, Publisher, Acoustic Live 'Abbie Gardner gives the grit to Red Molly with her Dobro playing. On her new solo CD we get to hear not only her instrumental and songwriting prowess, but her marvelously versatile voice, which can convey pain or playfulness or pure bad girl blues power.' -John Platt, WFUV --------------------- Coming five years and three Red Molly albums after her last solo CD, Hope is Abbie Gardner's latest solo recording- set to be released on April 1, 2011. The CD features her versatile voice backed by 3 types of slide guitar (dobro, lap steel, and National bottleneck) and a band comprised of not only her father, Herb Gardner (piano), but also her sister, Sarah Gardner, on organ. Ben Wittman (the drummer on Red Molly's James) locks in with upright bassist Craig Akin, who is featured on the first instrumental Abbie has ever recorded (a bass and dobro duet). The songs range from heartache to hope, from gritty lap steel to singing cellos, courtesy of Emily Hope Price. Folk sweetheart Robby Hecht lends his voice to three tracks and fellow member of Red Molly, Laurie MacAllister, is heard throughout. Longtime friends and collaborators Fred Gillen, Jr. and Beaucoup Blue also lend their voices. 'I feel like the songs revolve around Hope, both the song and the idea. Rather than having all hopeful songs, this CD reflects the glimmer of hope we all look for when in the midst of darkness.' -Abbie Gardner, talking about her new solo CD Hope.

Here's what you say about
Abbie Gardner - Hope.