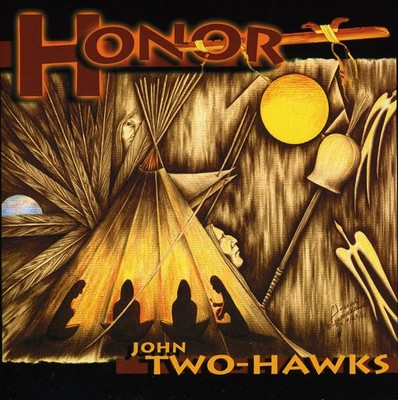 Textured with traditional sounds and overtones and rich with multidimensional musical instrumentation, this is a native music album with a message. The hit songs 'Black Cherry Moon' and 'Stone People' (performed for 12,000 at the Hartwall Arena in Finland) are from this record. ARTIST BIO John Two-Hawks is a GRAMMY® and Emmy nominated, Platinum Award Winning recording artist whose music has been featured in movies by Fox Searchlight, films by HBO, and programs by The History Channel. JTH is a bona fide Alternative, New Age and World Music visionary and pioneer who has pressed the envelope and pushed the boundaries of musical genres for decades. From collaborating on platinum selling music fusion projects which melded indigenous music with symphonic heavy metal, to contributing his music on Emmy award winning film scores which teamed native flute, voice and percussion with symphony orchestras and choirs, John has always challenged the limits of what is possible in music composition and performance. JTH is an international touring artist who has performed for audiences as large as 12,000. A remarkably gifted multi-instrumentalist, incredible vocalist and native flute virtuoso, Two-Hawks' signature brand of World Fusion, New Age, Native and Alternative music is known and loved by millions around the world. As well as his established reputation as a musician and recording artist, JTH is also a veteran award winning stage and screen actor (member of SAG), a published author, and a gifted inspirational keynote speaker who has shared the speaking stage with former Presidents, acting Senators and Hollywood celebrities. Regardless of the engagement, John Two-Hawks never fails to deliver a high standard of excellence, integrity and professionalism.

Here's what you say about
John Two-Hawks - Honor.