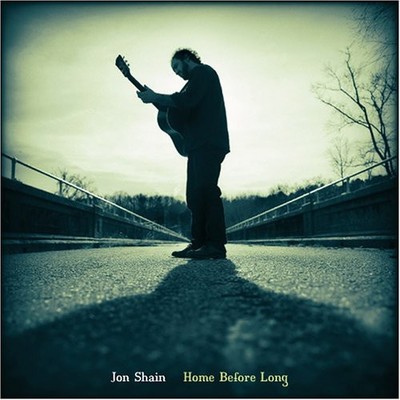 Home Before Long is Jon's newest release. Produced by Dave Mattacks and Tom Dube, this CD was recorded in Cambridge, MA this past year and features the Jon Shain Trio with Dave Mattacks and special guest Duke Levine. Nine new Shain originals shine along with a gorgeous new arrangement of the traditional 'Pretty Peggy-O'. Release date to CDbaby: June 18, 2005. Jon Shain is a veteran singer-songwriter who's been turning heads for years with his words, his fiery acoustic guitar work, and his evolved musical style-combining improvised piedmont blues with bluegrass, swing, and ragtime. In April 2005, Shain released his fourth solo album, Home Before Long. Recorded in Cambridge, MA and produced by legendary British drummer Dave Mattacks and Boston studio wiz Tom Dube, the music of Home Before Long ranges from straight up country blues and love-lorn ballads to raucous roots-rock. Also produced by Mattacks and Dube is Shain's previous release, No Tag, No Tail Light. Mattacks (whose studio drumming credits include albums with Paul McCartney, Elton John, and Richard Thompson) chose Shain's, No Tag, No Tail Light, for his first stint in the producer's chair. Shain recorded both albums with his band, the John Shain Trio. Shain's trio partners include FJ Ventre on upright bass and vocals, John Currie on dobro and guitar, and frequent guest Bill Newton on harmonica. Attending Duke University in the late 80s, Shain was a student of American history with a dedicated interest in southern musical traditions. This interest led him to a gig with piedmont blues legend Richard 'Big Boy' Henry. After a short apprenticeship in the blues world, Shain cut his touring teeth from 1989-1998 founding the Chapel Hill, NC folk-rock group, Flyin' Mice and their spin-off group, WAKE. While sharing stages with luminaries such as David Grisman, Tony Rice Unit, Hot Tuna, Leon Russell, Dave Matthews Band, and the Dixie Dregs, the band released four CDs and played clubs, schools, and festivals up and down the East Coast, building a legion of fans. After his band's breakup, Shain went solo, returning to his roots in the folk and blues circuit. He released Brand New Lifetime in 1999 to positive reviews and solid airplay in the US and abroad. Spring 2001 brought the release of Fools and Fine Ladies, which garnered even better reviews, and Shain's, No Tag No Tail Light brought outright praise from papers such as the Washington Post to national magazines such as Relix and No Depression. In addition to festival slots and headlining club dates, Shain has performed shows recently with Jorma Kaukonen, John Hammond, Robert Earl Keen, Keb' Mo', NRBQ, N. Mississippi All-Stars, Peter Rowan, Chris Whitley, Roy Bookbinder and many other greats. When Shain is not recording or performing, he stays busy giving private instruction in Piedmont blues finger style guitar, and teaching group workshops in songwriting, blues guitar, and 'jamming'. Whether in the one-on-one atmosphere of the teaching studio or onstage sharing a song with a roomful of strangers, Jon Shain is a natural communicator, keeping students and fans coming back for more.

Here's what you say about
Jon Shain - Home Before Long.