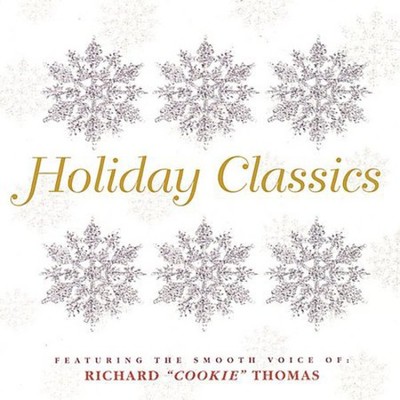 Richard 'Cookie' Thomas 'The Smooth Voice That Makes The Event' A versatile vocalist, and an undiscovered treasure, Richard Thomas' career began in Philadelphia in 1960 when he had the opportunity, at fourteen, to open for B.B. King. Richard most recent CD titled 'The Pleasure Of Your Company' was released in May 98. Lynne Arriale and her trio accompanied Richard on this project. This CD is made up of standards such as, My One And Only Love, Send In The Clowns, The Very thought of you and a many more wonderful Standards. Richard's current release, 'Holiday Classics.' includes songs such as: The Christmas Song, Winter Wonderland, I'll be home for Christmas, and many more classics holiday songs. Once again, Lynne Arriale, and her trio provide magic on this project. Richard's voice is especially suited to well-known classic standards. Richard draws his inspiration from the likes of Nat King Cole, Frank Sinatra, Sammy Davis Jr. and Johnny Hartmann. In fact, you can hear a bit of each one when Richard sings. Richard currently performs at the Landmark Club, Jazzmine, and the Long Ridge Tavern in Stamford CT., which are home based, and all very elegant clubs. Additionally, he performs at the well-known Silvermine Tavern in Norwalk, Ct the Doral Arrowood in Rye Brook NY, the Levitt Pavilion in Westport CT, the Jackie Robinson Jazz Festival in Norwalk CT, the Rich Forum in Stamford CT. He's also performed for the Christopher Reeves Foundation. Richard currently performs with famed Pianist Sarah Jane Cion, winner of the 1999 Great American Jazz Piano competition. Richard also performs with Jazz Pianist Danny Mixon, Drummers Arti Dixson and Bobby Leonard, who toured with Ahmid Jamal, Saxophonists Marion Meadows, Houston Pearson, Lonnie Youngblood, and Ken Gioffre of AWB. Richard's also performed with famed Bassist Phil Bowler, who accompanied Horace Silver. Richard's performances also include the Oaks Garden Theatre in Niagara Falls, Canada with The James Gaye Quartet, and the Registry Resort Hotel in Naples Florida. Richard has studied voice with screenplay writer Jay Fredrick's of Westport Connecticut, Vocal Coach Jackie Presti of NYC, and Voices International of NYC. Richard also provides Vocal coaching to several seasoned and non-seasoned singers. Richard maintains close relationship with Edge Studio of Fairfield Connecticut, one of the area's leading recourses for voice-over education, as well as the well-known Carriage House Studio of Stamford Connecticut. He is affiliated with the Johnston Agency of Norwalk Connecticut in addition to James Daniel Music of Stamford Connecticut.

Here's what you say about
Richard Thomas Cookie - Holiday Classics.