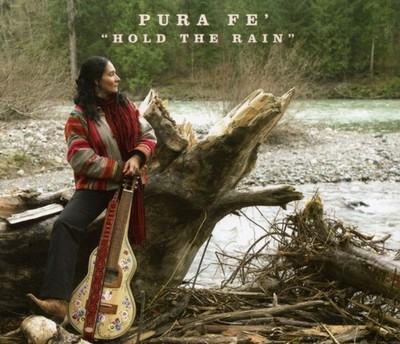 Pura Fe's Hold the Rain Released through the Music Maker Relief Foundation Pura Fé has released her 2nd solo album, Hold The Rain on the Music Maker Relief Foundation label. Pura Fe has long been known as an activist and voice for her Nation and supports Indigenous issues world wide. On Hold the Rain, Pura Fé delivers a very personal album featuring her powerful voice, hamonies, slide guitar and joined by one of Seattle's finest guitarists, Danny Godinez. The whole album is infused with Danny's heavy, melodic acoustic guitar picking, memorable solo's and a coe writer of 2 songs with Pura Fe. It is an interactive CD with exclusive video content. Each track shows Pura Fe's passion and diversity, traveling and weaving many genres. Her version of "Summertime" - dedicated to her mother - is an upbeat jazzy rendition and a reflection of her childhood watching her Mom sing with the Duke Ellington Orchestra. "If I was Your Guitar" was inspired by Kelly Joe Phelps whose lap slide led Pura Fe into "falling in love with music all over again." Also included is an anthem Pura Fe wrote to "unite the tribes of the Carolinas and Virginia," a traditional-like piece recorded with 30 Native singers surrounding her powerful lead vocal like a gospel choir. The song 'Hold the Rain' is dedicated to her Father who was also a singer, the Spanish Gypsy Blues ending to the song is in honor of him. Pura Fé was born in New York City. Her Spanish name translates as "Pure Faith" and was given to her by her father who is from Puerto Rico of Spanish, Corsican and Taino Indian blood. She was raised by her mother and a gifted family of female singers that are Tuscarora's who moved from North Carolina to New York City in the early 1900's. The Tuscarora are the most southern band of Iroquois people. They live in several large pockets such as the 40 thousand in Robeson County, NC. Recently Music Maker's Tim Duffy visited with Pura Fe and members of her Nation there. Duffy says, "We visited with Deer Clan Chief Mark Locklear and other elders. I learned of the great struggles they face as a federally unrecognized group of Indians. We recorded a great number of traditional songs with the Deer Clan Singers." Since her introduction to Music Maker, Pura Fé's solo career has blossomed in Europe. France's Dixie Frog Records re-released Pura Fe's first record Follow your Heart's Desire, which won the 2006 L' Academie Charles Cros Award for Best World Album and has recently issued Hold the Rain as well. Pura Fé is still struggling in the States but is becoming a very strong ambassador for Music Maker in France, Germany and Spain. With this new release Music Maker hopes to spread her beautiful message more widely throughout the United States. When William R. Ferris , widely recognized as a leader in Southern studies, African-American music, and folklore and former chairman of the National Endowment for the Humanities, called Music Maker and urged them to help Pura Fé with her musical career, they could not refuse. Ferris related that the academic community was just beginning to recognize the great influence of Indian culture on Southern foodways, religion, music and culture. It was a perfect match. Look for this and other Music Maker releases on www.musicmaker.org.

Here's what you say about
Pura Fe - Hold the Rain.