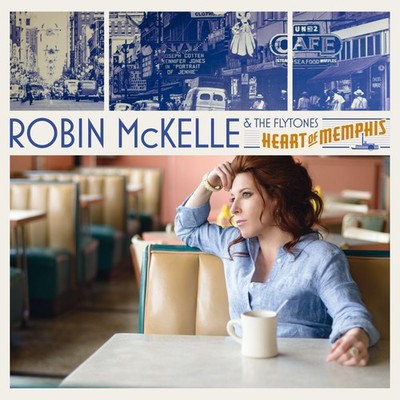 Acclaimed as one of the great new jazz singers, Robin McKelle has been taking risks, redefining her artistic identity and mining her inspirations in blues and soul music. Though much of this Rochester, New York natives career has been based in Europe, her latest record finds her drawn to the core of American blues and soul, the HEART OF MEMPHIS. It's in the cradle of the Blues that she imagined making this explosive album in the great soul tradition of the 60/70s, adding a contemporary touch with her songwriting. Produced by Scott Bomar of the Bo-Keys, the man behind the mixing console for many of Isaac Hayes' and Al Green's recording sessions - McKellemade it clear she wanted her album to be in line with the sound of these artists. With her deep voice and her earthy, frank, direct and gut-wrenching singing, McKelle embraces the legacy of those great artists from a city well-known for it's tendency toward raw expression. Robin McKelle released an album of traditional swing jazz recorded with a big band Introducing Robin McKelle in 2006, and after a NPR segment on Robin, the album jumped to the top the Billboard and Amazon charts. Soon the jazz world was ecstatically talking about the next Ella Fitzgerald, and comparing her favorably to the likes of Nancy Wilson. A French record company licensed the album and issued a follow-up, Modern Antique (2008). McKelle started touring major festivals and clubs around the world with great success. But in 2010 the woman from Rochester, New ork, decided to take a courageous risk with her album, Mess Around, which revisited themes dear to Leonard Cohen, Doc Pomus, and Willie Dixon. A year later she continued refining her identity as an artist with the release of Soul Flower, an album in which she took on a much larger songwriting role. For HEART OF MEMPHIS McKelle wrote eleven of the thirteen titles. Surrounded by her loyal Flytones and helped by her bass player and musical partner Derek Nievergelt, she took up the challenge in 2013 of crafting amazing and authentic soul music songs. "I really love writing," she says. "It's important to continue create new sounds and push ourselves into unknown places. That's what artists are put on this earth or, taking risks and chances. Even though she doesn't deny her influences, Robin McKelle manages to write captivating bluesy and soulful songs without falling into the revivalist trap, and remains genuinely sincere while retaining a strong point of view as an artist.

Here's what you say about
Robin McKelle - Heart of Memphis.