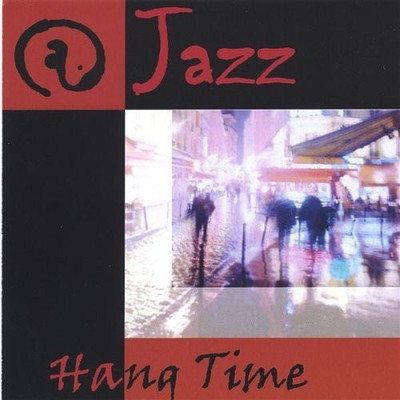 @Jazz is a seven piece groove oriented jazz group featuring trombone, sax, guitar, piano, bass, drums and percussion. As you will hear, their music spans a broad range of contemporary jazz styles from latin inspired pieces to more urban groove-oriented songs. Hang Time is the second recording effort for the band. Over the past couple of years since their first CD, 'About Time,' the sound and style of the band has continued to evolve with additions to the band as well as new compositions. Hang Time features primarily original tunes written by the members of the band. Of the eight tunes on the CD, six were written by Martin Manley, one by Lee Donnelly and one 'LA Fiesta' is a re-work of a Chick Corea tune. The first song on the CD, 'Mr Wonder,' was composed by Martin and has a rhythmic groove feel inspired by recent albums of 'Medeski, Martin & Wood'. The melody and harmonic structure are more reminiscent of Stevie Wonder - hence the title. The combination of the trombone and the tenor sax complete the gritty urban feel. On Mr Wonder, you get to hear a killer sax solo from one of our new members, Alan Early. His earthy tone really complements the urban sound we striving for. The second song, 'Renacido,' is a complete re-work of a tune that Martin wrote many years ago. After playing around with it for years, a Latin version inspired by great percussion work of Enrique Pedrasa emerged during a practice and the song really came together. With the completely new feel and life for this song, we felt that a great title would be Renacido or Spanish for 're-born'. The original concept and inspiration for our third song 'Lizard Skin' came from Herbie Hancock's 'Chameleon'. One night during rehearsal, the band was having great time grooving on some of the basic changes from Chameleon. As the band continued to improvise, a couple of new riffs evolved. Inspired by the creativity of the band, Martin went off and created a whole new tune from those riffs and the basic vamp. He added a completely new B-section and 'Lizard Skin' emerged. 'Hang Time' is named for the bass-line motif that seems to hang in mid-air. A be-bop style tune is overlaid on the bass-line, leading to some interesting tensions. The fifth song was written by Lee Donnelly. It's origins go back to when Lee was at the Berklee College of music and was inspired by a Brazilian guitarist and singer, Celia Vaz. The song, 'Canto de Celia' has a modern Brazilian feel. It's written in 7/4 with the bridge in 4/4. The 7 feel gives the song a great sense of motion and energy under the beautiful melody. The sixth song 'Here's to Horace' was inspired by and is dedicated to the great groove jazz classics of Horace Silver. 'Here's to Horace' provides a great for Jim's trombone and Martin's piano. 'Drifting Down' is a much quieter song for the band. It features a laid back melody laid on top of a repeating bass figure in 6/8 time. To finish off the CD is LA Fiesta, an unusual arrangement of Chick Corea's 'La Fiesta.' This is a great Flamenco-inspired song that provides room for lots of interesting dynamics. However, after playing the standard version one night, they discussed whether the tune sounded better in a 3/4 or a 4/4 time signature. As a joke someone suggested we go one step further and try it in 5/4. After a moment of silence (or shock), smiles grew on everyone's faces - why not! After a couple tries, we decided that the result was very cool, and it's been that way ever since. @Jazz has been an ongoing evolution & musical journey since it's inception in 1998. This CD represents the same core group as our first album 'About Time' along with two great new additions to the band. Over the years, they've often talked about expanding the band to add percussion and additional horn but were reluctant to make any changes so nott to disturb the special chemistry they have been so fortunate to have. As has been in that past with the evolution of @Jazz finding just the right people at the right time, they once again found new friends and compatriots to not only help move their sound to the next level but also fit their collective personality. With this CD. Enrique Pedrasas joins on percussion and provides a wonderful Latin influence adding a new depth to the sound of the band. Also debuting with the band on this CD is Alan Early playing tenor & soprano sax as well as flute. The addition of a second horn has added a great deal of punch to their arrangements. Alan's depth of experience as a jazz musician is greatly valued and is making a huge impact on our.

Here's what you say about
@jazz - Hang Time.