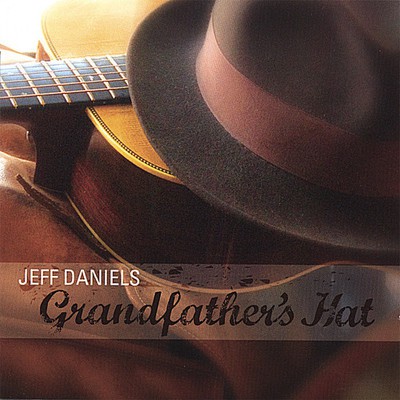 When you think of "grassroots" and "down to earth", you don't normally think of a movie star. You especially don't think of a movie star the caliber of Jeff Daniels. Yet that is exactly what Jeff has accomplished with his second CD release, "Grandfather's Hat". With the follow-up album to "Live and Unplugged," Daniels has proven that he is not an actor who sings, but an accomplished singer/songwriter who's musical talent does not require the support of his acting. Further proof of his talent is supported by the musicians Daniels has performed with over the last couple of years. Although it took him some time to feel comfortable on stage behind his guitar, Daniels' confidence has matured with his songwriting, being invited onstage to perform a few songs with legends Lyle Lovett, John Haitt, and Guy Clark, during their rare "Songwriters" tour. Having his pal Keb Mo' join Jeff on stage was equally rewarding (Jeff calls it a "free guitar lesson"). From time to time he's also been fortunate to expand his shows to sold out venues outside of Michigan. "Grandfather's Hat" showcases Daniels' range as a songwriter, from the laugh out loud humor of "Have a Good Life (Then Die)" to the quiet poignant lyrics of "Middle Of The Night". His honest, sincere and relatable approach to the songs on the CD remind us of our own lives, hopes and dreams. A Michigan native, Daniels never forgets his roots. The rowdy rendition of "Detroit Train" with guest artist, Alto Reed, saxophonist with Bob Seger's "Silver Bullet Band," is a fun, energetic, rock and roll tribute to the city that bares it's name; On the first CD, "The Lifelong Tiger Fan Blues," was a lament to the team with the second worst season in baseball history. On this CD, Jeff had the rare opportunity to rewrite the lyrics ("The Life Long Tiger Fan Blues, Revisted") as an ode to the almost-World-Series-Champion team reinforcing again his love of all things Michigan. Fans of Jeff's popular original stage play, and independent feature film, "Escanaba In Da Moonlight," have eagerly awaited the musical tribute to the subject, and he delivers with, "The Ballad of The Buckless Yooper". Teaming up with the energetic foursome, "Steppin' In It", he spins the folk tale of Ruben Soady, the only man in Michigan's Upper Pennsula never to bag a buck. "Grandfather's Hat" is an evolution of a career in motion. What started out as a means of raising money for the equity theatre he founded (The Purple Rose Theatre in Chelsea, Michigan) has become a back road journey that taps into the storyteller's head. But now it has a melody, as well as a story to tell. And if you happen to find your foot tapping along, then that would be just fine. Proceeds of the sale of "Grandfather's Hat," benefit the Purple Rose Theatre.

Here's what you say about
Jeff Daniels - Grandfather's Hat.