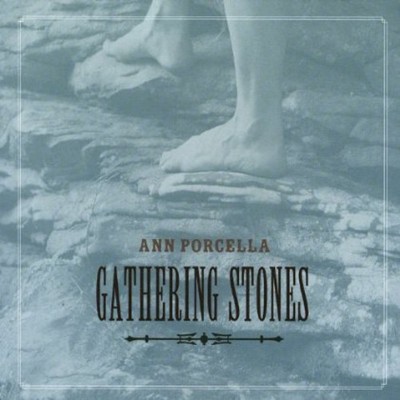 Ann Porcella's warm, strong, sensitive singing and honest delivery will introduce you to some new and old heart songs to carry you through life's varied journeys. Honey-rich harmonies and surprising instrumental accompaniments on banjo, guitar, fiddle, and mandolin present deeply-rooted American music. 'This is what the music should be about.' --Paul Brown Bluegrass Unlimited says: Ann Porcella has gathered a group of talented friends to help her on this solo release of 14 songs. She has Paul Brown on banjo, Mark Clifton on resonator and Weissenborn guitar, Ira Gitlin on guitar, Marcy Marxer on percussion, Al Murphy on fiddle and mandolin, Bill Schmidt on banjo and guitar and Flawn Williams and Dede Wyland on backup vocals. Porcella sings in a range and voice that reminds me of Patsy Cline, though her material is much more traditional. She opens with A.P. Carter's "I Have An Aged Mother" with just her voice and guitar and closes with the a cappella "Farewell, My Friends." She follows with Fran Weber's lovely "Bluegrass Lullaby" which adds mandolin, resonator guitar, and three-part vocals to the arrangement. "Building On That Rock" is by Julia Mainer and adds Bill Schmidt's banjo to Porcella's guitar and voice. Ralph Stanley and Bill Clifton wrote "Stairway To Heaven." Three of the songs are by E.J. Blombergand/J.L. Nelson, "Country Girl," "The Solid Rock" (lyrics by Edward Mote), and "Charlotte's Song." Porcella wrote the title cut, "Gathering Stones," which uses her full vocal range. This recording is a showcase for Ann Porcella's singing, and that is always in the forefront with these simple, but effective arrangements. She has a warm and strong voice and lots of interesting material, new, old, and traditional. There is quite a bit of gospel here, but if there is a unifying theme, it is to try to get in touch with a variety of very strong emotions, especially dealing with loss of loved ones, by singing through them. Those who enjoy strong and heartfelt singing will enjoy Ann Porcella's recording. SAG And from the Old Time Herald: I know Ann Porcella can't possibly be a reincarnation of Sara Carter. For one thing, there were years when both were alive at the same time. But they sure do sound alike. Ann has a wonderful low-alto voice, which is also a good blending voice, as she demonstrates both here and with the Blue Moon Cowgirls. Of course, she has Dede Wyland and Flawn Williams to blend with! As the late Hazel Dickens has written, 'It's hard to tell the singer from the song.' It is hard to imagine anybody but Ann making this album, and assembling this selection of songs to sing on it. The first sentence of the liner notes reads, 'I was in France when I learned that my mother had died.' The whole CD can be considered a meditation on the twin themes of the sadness of death and the joy of the promises offered by Christian faith--the metaphor of the church (or Jesus) as a rock. In fact, four of the songs here have 'rock' somewhere in the title, and Ann wrote an original song called 'Gathering Stones.' You need to read and digest the liner notes to appreciate this CD fully, as I hope you will. This is an intensely personal CD. Ann weaves a lot of family history and geneology into both the liner notes and the songs. She is the youngest of seven children. Her father was a preacher, two of her sisters married 'men who grew up in a small missionary community,' and her other two sisters married 'delightful bluegrass musicians.' The two brothers-in-law from the missionary community are songwriters and wrote three of the songs here: 'Country Girl,' 'The Solid Rock,' and 'Charlotte's Song.' The last of these tells ths story of a sick woman reassuring her terminally-ill husband that it will be all right for him to welcome death, and his well-deserved trip to Heaven, and that she will join him there soon. As an expression of faith, it's wonderful, but I found it to be the saddest song on the album, which is saying a lot. More cheerful are the songs with 'rock' in the title. Ann's 'Building On that Rock,' which she got from Julia Mainer, is pure joy and exuberance--a lot like the Mainers' original. 'I Am On the Rock' uses, we are told, a melody from Ghana, and is done in wonderful four-part harmony (the clue is again in the liner notes; they say 'Ann: vocals' rather than 'vocal' -- I suspect overdubs) and Marcy Marxer's percussion. I find myself wondering if the melody crossed the Atlantic twice; it reminds me of early shaped-note music and I could easily imagine it reaching the Gold Coast via missionaries. Eight of Ann's friends (including her husband Bill Schmidt) contribute backing vocals and instrumental talent here. For instance, one of the things that makes 'Building on that Rock' so good is Bill's banjo work, obviously heavily influenced by Wade Mainer's original. Paul Brown worked up a banjo setting for 'Leaning on the Everlasting Arms' which completely drove Robert Mitchum's singing in 'Night of the Hunter' out of my mind. Thanks, Ann Bill, Paul, and everybody else! --Pete Peterson.

Here's what you say about
Ann Porcella - Gathering Stones.