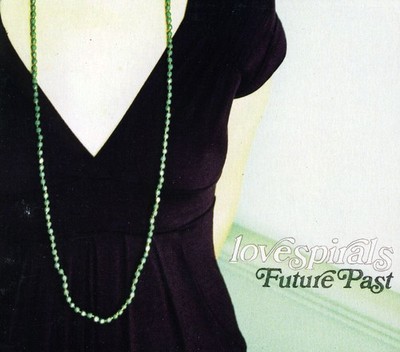 LOVESPIRALS SINGLE, 'LOVE,' FEATURED ON CD BABY MUSIC DISCOVERY PODCAST 6/15/2010! 'Future Past,' Lovespirals' 4th full-length album, is a career-defining synthesis of the band's vast musical influences into a fresh new electronica sound. This captivating 11 track set by multi-instrumentalist/producer, Ryan Lum, and vocalist/lyricist, Anji Bee, contains their strongest songwriting to date, with an attention to detail in recording quality and production that is unmatched in the duo's decade-long history. As the title suggests, Lovespirals have melded the contemporary with the classic; embracing the past, but with an eye towards the future. Lovely album opener, "Home," happily welcomes the band's return to electronica from their previous Dream Pop release, 'Long Way From Home.' This track, along with the gorgeously melancholic "Shine," and epic album-closer, "Believe," are bittersweet electro-pop gems in the vein of early Air or Zero 7, with lazy beats, lush arrangements, and Bee's honeyed vocals. But Lum's masterful guitar work sets the band apart from their contemporaries, bringing the rhythm and lead playing of a classic rock artist to a largely computer-based genre. It's the magical combination of Lum's soulful guitar and Bee's sumptuous vocal harmonies that is the cornerstone of Lovespirals' unique signature sound. With a subtle yet powerful mix of musical moods and emotional expressions, 'Future Past' is sure to enchant both old and new listeners for years to come. ADDITIONAL ALBUM INFO: The album's first single, "Shine," was featured as the Track of the Day in Alternative Pop on Garageband.com the first week of release. It also garnered the Best Female Vocals in Alt Pop award for 2 separate weeks. "Shine" was also featured on the front page of TheSixtyOne, having been "bumped up" via listener selection. Additionally, "Shine" has been featured on a number of podcasts including Dave's Lounge, XtraChill, Indie Music Sampler, The Mothpod, Cadence Revolution, and Bee's own popular weekly chillout music podcast, The Chillcast with Anji Bee. "Home" was the second single released from 'Future Past,' this time in video format. Bee herself created the music video, utilizing skills gained from producing her monthly music vidcast, Chillcast Video. The band filmed the video footage themselves on a Mino HD camcorder, some of which was shot during their road trip to master 'Future Past' at the home studio of renowned ambient musician, Robert Rich. Lovespirals are set to release their 3rd single, "Love," in June of 2010. The 'Love EP' will contain remixes by a variety of indie artists including Chill Factor-5, Divasonic, Xurba, 7 Day Visa (whom Bee collaborated with on 1 track for the 'Buenos Aires' release due out soon), Falling You (whom Bee collaborated with on 1 track for their upcoming 5th album), and former Projekt Records labelmate, Soul Whirling Somewhere -- who previously produced a lavish remix of "This Truth" from Lovespirals' prior album, 'Long Way From Home.'

Here's what you say about
Lovespirals - Future Past.