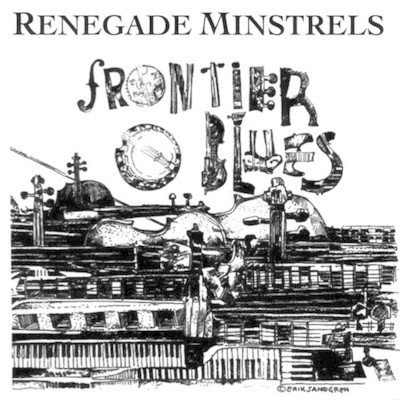 Renegade Minstrels musical textures reflect the range and richness of the Northwest where they play. Mandolin, harmonica, upright bass, trombone, drums, guitar and vocals fuse to form lyrical visions of Northwest vistas. Bandleader Joe Seamons draws on panoramic spirit of Woody Guthrie and other English literature to forge the band's original songs. Joe's words and melodies are spurred by the exuberant versatility of his four fellow musicians. Even at it's rollicking and rambunctious peaks, Renegade Minstrels' music contemplates the texture of Northwest living. Joe Seamons started playing music in Portland in 2003, and Renegade Minstrels formed around him like debris accrued by a snag sticking up out of the Willamette River. First, along came Luke Dennis, who left Berkely's School of Music in Boston to see how he liked Portland's music scene. Joe heard him playing fiercely bluesy dobro in a practice room at Lewis and Clark College's music department, and immediately asked him when they could start making music together. Soon afterwards, Joe heard Jon Ramm-Gramenz blowing funkily on his trombone with a jazz ensemble, and liked his playing so much that Renegade Minstrels gradually incorporated Jon's sound into all of their songs. Forest Carter joined up next, drumming with refreshing sensitivity and keen dynamic range. Lastly, Austin Moore came on the scene, wielding a mandolin like it was a live animal, partly tamed. Stylistically, the band glories in their range of influences--they can swing all the way from folk to funk music in the course of one four four bar of song. They don't only play in bars, of course, but also in concerts and classrooms around the Northwest. In some of their songs, you hear solid doses of call and response, with Joe's vocal phrases setting off playful lines of trombone whoop and growl or mandolin tinglings. Other songs feature hip swinging beats that break down the DNA of jazz to it's cellular elements of blues and western harmony. All the while, the musicians' awe and respect for tradition is evident in how they renovate traditional music with melodies and lyrical imagery and that depicts diverse perspectives. Renegade Minstrels are all about perspective: they embrace the adaptable jazz musician's outlook while seeking new vistas that expand America's musical frontiers. The unique qualities of both their instrumentation and their lyrical dynamism make for distinctive music that's delivered with a wry and jovial spirit.