Alyson Cambridge & Lydia Brown - From the Diary of Sally Hemings 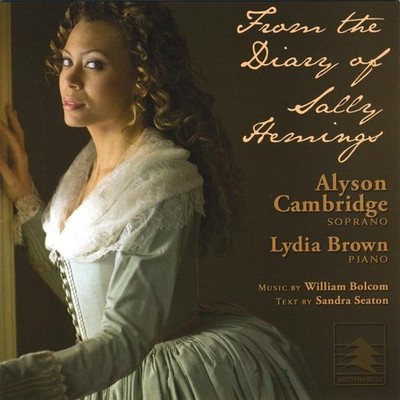 There is, of course, no such thing as a real Sally Hemings diary, at least none that anyone has found; were there a real diary, Hemings would have had ample reason to destroy it herself to protect her children's lives. The present "unofficial" diary-to use Sandra Seaton's term-exists because I asked her to write one. When Florence Quivar asked me for a cycle on Sally Hemings I was on the point of refusing; it is such a "now" sort of topic, I feared, and I had not seen any attempts to portray her that I'd liked-it is too attractive a subject for the wrong reasons. Then I thought of Sandra, who'd become a friend because of our common interest in the black Broadway musical of 1921, Shuffle Along, by Eubie Blake, Noble Sissle, Aubrey Lyles, and Flournoy Miller; she is a descendant of Miller and sought me out. The dedication of the cycle, in memory of Flournoy Miller, is in gratitude for his posthumously bringing Sandra's work to my attention. Seaton's own plays deal penetratingly with the world of the African American middle class in a refreshingly nonstereotypical way, and I felt she would understand Sally better than anyone else I knew. When she sent me the first draft I saw she had found a Sally Hemings I could believe emotionally. Sally's world was by necessity an indoor, protected, rather quiet one, and the spareness of Sandra's language for Sally, just what I'd hoped for, is answered by a stylistic sobriety in my own music. I opted for a harmonically plain language with a somewhat French atmosphere (evoking Hemings's Paris sojourn), with African American melodic references well to the background. I did not want to fall into the expected cliché in so much work I'd seen on Sally; she was not a cardboard icon, standing for a group. In every way she was unique, an individual; otherwise how could she have fascinated someone like Jefferson for thirty-eight years. - William Bolcom.

Here's what you say about
Alyson Cambridge & Lydia Brown - From the Diary of Sally Hemings.

1) They Say I Was Born Old
2) Martha and Maria
3) White Waves
4) Paris C'est la Ville Vivante
5) The Master Brings Music to His Sitting Room
6) I Was Carrying a Tray When He Called Me
7) They Say I Was Born Old... the Rage the Anger
8) Come Back to America
9) Back Home at Monticello
10) Purple Hyacinth Begins to Bloom
11) My Sister Ghost
12) Peonies a Perfume Box
13) Mister Our Child Is Frail
14) A Dark Winter Blue-Black Evening
15) Old Shoe!
16) A Wild Man Home from the Woods
17) Papers! I've Never Seen So Many
18) Night Watch Till Early Morn