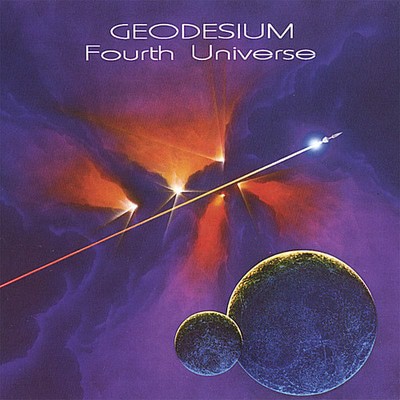 GEODESIUM (pronounced Gee-oh-dee-zee-um) A blending of the words 'geodesic dome' and 'planetarium' describing the environment which gave birth to the space music of Mark C. Petersen. Mark is unquestionably the most prolific composer for the medium, and the GEODESIUM name has become synonymous with planetarium music. Since 1978, more than 800 planetaria around the world have purchased Mark's original planetarium music for their shows, and GEODESIUM albums are popular items in planetarium gift shops. Mark uses Emulator and synthesizer sounds, blended in a rich, varied collection of original instrumental works. Relaxing yet provocative, GEODESIUM stylings embody 'traditional' space music -- that ethereal, beautifully floating music that characterizes the genre -- as well as 'new age'-style works and up-tempo, rhythmic sonic odysseys. In 'Fourth Universe', Mark expands on many of the musical ideas expressed in 'West Of The Galaxy'. Eighteen musical settings showcase the best music from planetarium soundtracks produced during 1986-1991. It has also been featured on 'Music From The Hearts Of Space' and 'Musical Starstreams', and has sold thousands of copies throughout the U.S. at Natural Wonders stores. This is our best selling album, recommended for those just starting out - with it's variety of styles, it's sure to please most every taste! =================================================== REVIEWERS HAD THIS TO SAY: 'The latest Geodesium album shows a big step forward beyond their fine Heartbeats debut, West of the Galaxy. This new release is in a league with Jonn Serrie's works, as music from and for the environment of the planetarium. Ranging from dynamic, rhythmic pieces to ethereal, beautifully floating music, Fourth Universe portrays magnificent visions of the universe. The song titles are often clues to the tempo. The opener, 'Sailing To Neptune' is a cruiser which rides the waves of the galaxies, while 'Deep Blue' floats slowly as it spirals deeper, and 'Rhapsody on a Red Planet' uses classical motifs to envision the desolate planet-scapes of Mars. Flights of fantasy move through deep space, romantic and ethereal at times, upbeat and rhythmic at others. The Geodesium sound is full of clarity, expressing it's own view of space and all the sounds generated from these deep expanses. Eighteen tracks altogether make up this nearly hour-long release, marked by an ability to portray magnificent, memorable visions of the universe through it's varied approaches to the space music genre.' -- Heartbeats ----------------------------------- 'Geodesium is compelling listening, with it's floating atmospheres, moments of delicate beauty, sweeping neo-classical themes and blasts of unearthly sound which somehow juxtapose into a coherent whole. It all adds up to what must be the best, and most enjoyable, Geodesium album ever.' - Ben Kettlewell, i/e and DreamsWord ===================================================.

Here's what you say about
Geodesium - Fourth Universe.