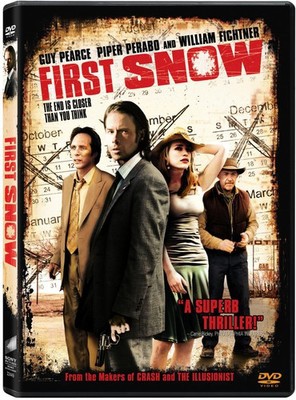 Jimmy (Guy Pearce) is a smooth-talking salesman who finds himself making a detour after his car breaks down on a desert highway. To pass the time, he pays a visit to a local palm reader, Vacaro (J.K. Simmons). Vacaro makes a few positive predictions for him, but then appears deeply disturbed by a vision. Jimmy demands to know what he saw, but Vacaro refuses to tell him, and won't even accept payment for the reading. A few days later, Jimmy becomes uneasy when various predictions begin to come true. He returns to Vacaro and begs to know what is in store for him. Vacaro admits that, yes, Jimmy's days are numbered, and he is to meet his fate-whatever it may be upon the first snowfall. Director Bob Yari, Mark Fergus Star Guy Pearce, Piper Perabo, William Fichtner, J.K. Simmons, Shea Whigham, Rick Gonzalez, Jackie Burroughs, Adam Scott Special Features: Anamorphic Widescreen Full Frame - 1.33 Audio: Dolby Digital 5.1 Surround Subtitles - English, French, Spanish Runtime: 102 minutes Year of Release: 2007.

Here's what you say about
First Snow.