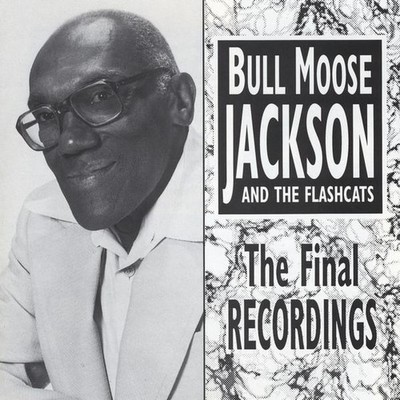 Based in Pittsburgh, Pennsylvania, The Flashcats earned their fanatical following with ten years of wild and unpredictable R&B-based rock. In 1983 they recorded Bull Moose Jackson's 'Nosey Joe' as the flip side of their 'Appetite For Love' 45 (BOGUS #10-011883). When Pittsburgher Howard Kozy mentioned that Bull Moose was alive and well, and working for a catering firm at Howard University in Washington, DC, Flashcats manager and Bogus Records president, Carl M. Grefenstette, arranged to have Bull Moose come to town for a show with the band. The resulting sold-out performance proved that Bull Moose hadn't lost his ability to captivate an audience with his humor and still-powerful voice. He and The Flashcats hit it off so well that they rushed to the studio, and though he hadn't recorded in years Bull Moose and Flashcats guitarist Dave Kent co-wrote a new song, 'Get Off The Table Mable (The Two Dollars Is For The Beer).' Released on Bogus Records, 'Mable' (BOGUS #12-042684), received it's national debut on the syndicated Dr. Demento Show, and a mention in Billboard brought calls from all over the world, supporting Bull Moose's re-entry into show biz. The international success of Mable led to the release of an entire LP, 'MOOSEMANIA!' (BOGUS LP6-0214851), and a full-fledged revival of Bull Moose's career. In 1984 and 1985 Bull Moose and The Flashcats performed from New York to Los Angeles. Bull Moose also toured Europe and made his first ever appearance at New York's Carnegie Hall. Bull Moose was thrilled to be back in the public eye, and he loved talking to fans from the old days as well as a new generation of young fans. In 1986 work was begun on a second LP, but Bull Moose's health took a turn for the worse, and only two songs were recorded. Although he chose to ignore it, Bull Moose had been suffering with cancer for years. He became too weak to perform, and though he finally consented to therapy, the disease claimed his life in 1989. This CD presents the entire 'MOOSEMANIA!' album, plus those last two songs recorded by Bull Moose - the final recordings by one of the greats of Rhythm & Blues.

Here's what you say about
Bull Moose Jackson & the Flashcats - Final Recordings.