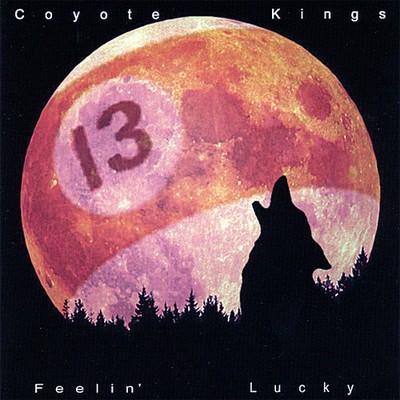 What do you get when you take three extremely talented Blues and Bluesrock artists (that also happen to be great friends), and turn them loose in the studio with no time restraints, no pre-conceived musical notions, and no adult supervision? You get The Coyote Kings' FEELIN' LUCKY! With over 80 years combined experience recording and performing for regional, national and international audiences, Robin Barrett, Curtis "Rocket" Johnson, and "Mondo Mike" Cook make up the core of the band. Each is a respected artist in his own right, with Robin Barrett well known World-wide via the Internet for his chart topping Bluesrock, Curtis Johnson a respected drummer in the International Blues community, and Mike Cook the recognized premier "mondo" guitarist of the Northwest. FEELIN' LUCKY features 12 original powerhouse tracks, showcasing the collective talents of the three. What sets Coyote Kings apart from other Blues ~ Bluesrock artists? First and foremost, incredible hook oriented songs that still retain the heart and soul of Blues and Roots... The kind you're still humming when you get home from the show... fueled by not one, but two jaw-dropping guitarists, burning up the stage like a Northwest wildfire... built around a world-class drummer, movin' and groovin' everyone near enough to feel it... and finally, a thundering, rock-solid bass, that makes each Coyote Kings song register a 9.4 on the Richter scale. This album is a prime example of the Coyote Kings at their best... playing the music they love, the way they love to play it. FEELIN' LUCKY features a variety of rockin' Blues, from classic Blues to Blues-rock, Stax-Volt to rootsy and classic Rock-n-Roll... from New Orleans to Chicago to Austin to the West Coast and all points in between. Listening to this CD is like being at a 3 day Blues festival... You're going to hear a lot of different styles and it's all going to be great! All it takes is one listen to know FEELIN' LUCKY is a classic! A short list of events and clubs CK members have played includes: The Chicago Blues Festival, Waterfront Blues Festival, Mississippi Valley Blues Festival, Duluth-Superior Blues Festival, Blind Lemon Jefferson Blues Festival, Sunbanks Blues Festival, Ritzville Blues Festival, Hot August Blues Festival, Antone's, Buddy Guy's Legends, House of Blues (N.O., & L.A.), The Dandelion, Cascade Tavern, Larry's Greenfront, The Fort Spokane Brewery, Winthrop Palace... The list goes on and on. "Kings" have gigged and shared the stage with B.B. King, George Thorogood, Albert Collins, The Fabulous Thunderbirds, Elvin Bishop, Roy Rogers, W.C. Clark, Jimmie Vaughan, Alan Haynes, Robert Cray, Charlie Musselwhite... again, the list goes on and on. The new CD, "Feelin' Lucky," is out now! It features 12 original powerhouse tracks, showcasing the collective talents of the Coyote Kings. CK are fast becoming regarded as a hot ticket... The new premier purveyors of "The Northwest Sound." The reviews are in! 'Packed with great tunes' 'Blistering guitars' 'Haunting harp' 'Tasty sax work' 'Great vocal work' 'It's a great CD that I couldn't get out of the stereo. Just see if you can keep from playing the entire CD twice! Or three or four times for that matter. Buy it now. It's damn good!' Kevin Shenefield - Blues News 'Every time I've had the pleasure of catching the Coyote Kings it's been a rockin' good time! You can't miss with these guys because they bring a solid show with blues, rock and even humor all rolled into one. Very entertaining!' Ray Hanson - Walla Walla Blues Society President "With their music evoking memories of Stevie Ray Vaughan and ZZ Top, the Kings delivered an explosive and powerful performance on Oct 26. Having over 80 years of combined experience between the members playing before audiences and recording, the band seeks to establish a new higher standard for Blues-rock in the Pacific Northwest. The Kings bring it to town on "Feelin' Lucky," which features 12 tracks of hard-driving original material." Gene Wilks - Union-Bulletin, Marquee "Feelin' Lucky" exceeded my expectations. Great grooves, smokin' hot hooks, and great lyrics make up songs that get stuck in your head. The album stands up to other albums currently on the top ten Blues album charts. Bluesy Rock & Rockin' Blues only begin to describe this album. "Feelin' Lucky" takes you through a wide range of influences, styles, and Blues emotions. Barrett, Cook, and Johnson have great chemistry together both live and on this CD. Go see them live and have them autograph your copy before this album hits the charts!" Rick Phillips - Foyer Magazine.

Here's what you say about
Coyote Kings - Feelin' Lucky.