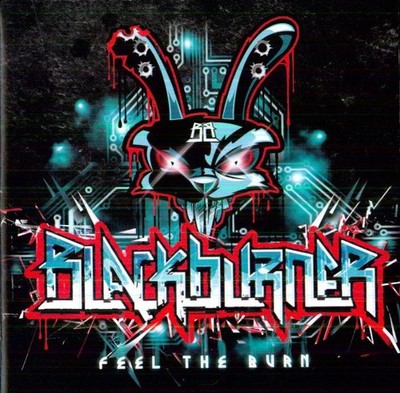 Cleopatra Records proudly presents Blackburner, a bold new force in electronic music masterminded by two multi-talented producer/musicians, Skyla Talon and Kyle Hickey. A Michigan-born Los Angeles transplant, Talon cut his teeth in the music capital of the world with the modern metal band Killingbird, which he founded. In 2005, Talon lent his guitar playing and songwriting talents to Scum of the Earth, the side project of ROB ZOMBIE axeman Riggs. After a busy touring schedule that saw Talon performing around the country with acts such as HATEBREED and TYPE O NEGATIVE, Talon began experimenting with electronic dance music production. Inspired by the revolutionary new sounds in Dubstep and Glitch music generated by the likes of fellow metal-head-turned-DJ SKRILLEX, Talon recruited Hickey for an extra dose of heaviness and in an explosion of computer wires, guitar strings and patch cables, Blackburner was born! Soon the duo was remixing tracks and releasing original compositions through the Cleopatra imprint Hypnotic Records. The project immediately met with enormous success as compilations featuring Blackburner, alongside Dubstep luminaries NERO, RUSKO, & DUBBA JOHNNY, climbed the iTunes Electronic charts, with Blackburner tracks racking up over 50,000 individual downloads. Bolstered by this overwhelming on-line buzz, preparations were made for a full-length album - and now the time has come for Blackburner to make it's worldwide launch. Influenced by the member's backgrounds as metal guitarists/vocalist, Blackburner combines the heavily twisted and seriously aggressive beats of Dubstep and Glitch with the melodic hooks of Rock, Industrial and Electronica to create a daring yet widely appealing new hybrid sound. With guest appearances by TANGERINE DREAM founder Edgar Froese and PORCUPINE TREE sideman John Wesley, Blackburner's debut album is about to make 2012 the year to FEEL THE BURN! -Official Press Release.

Here's what you say about
Blackburner - Feel the Burn.