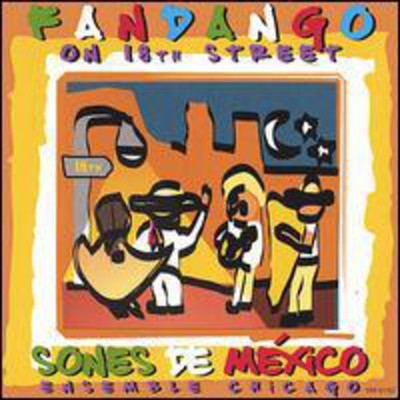 Audiences who bought Sones de Mexico Ensemble's GRAMMY® Nominated CD 'Esta Tierra Es Tuya (This Land Is Your Land)' are discovering the band's lesser-known previous albums, including 'Fandango on 18th Street,' and finding great material in it too. In some parts of Mexico, a fandango is a fiesta where 'son' (Mexico's regional folk music) is played and danced by everyone into the night and on until sunrise. 'Fandango on 18th Street' was recorded over a four year period by Chicago's Sones de México Ensemble. As originally conceived, all songs on the album needed to be danceable and present listeners with several styles of Mexico's broad range of traditional music and dance, and then some. 'Fandango on 18th Street' is is named after the main street that runs through Pilsen, one of Chicago's well-known Mexican neighborhoods. The album represents a idyllic fandango that takes place at a crossroads of many immigrant cultures and brings together many of the band's friends to represent a thriving Mexican culture in a multicultural world. The CD is an all-acoustic smorgasboard of authentic Mexican music featuring dozens of unique musical instruments, infectious rhythms that anyone can dance to, and a parade of noted muscal guests including Guillermo Velázquez, Grupo Mono Blanco, David Haro, John Rice, Everardo Rey, a brass quintet led by John Hagstrom of the Chicago Symphony Orchestra, and others. The core band on this 2002 Sones de México Ensemble recording was Victor Pichardo (music director), Juan Díes (producer), René Cardoza, Raúl Fernández, Renato Cerón, and Gonzalo Cordova. The album was recorded on the now defunct Alien Soundscapes studios owned by Chris Greene on 18th Street, Chicago.