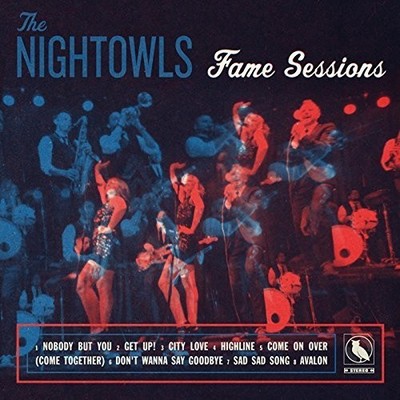 Last year, the Austin-based, 10-piece band The Nightowls packed up their van and drove 1,390 miles from Austin to Muscle Shoals, AL to record their new album at the iconic FAME Studios. Joined by David Hood and Spooner Oldham from the original FAME Studios house band The Swampers, the band tapped into the studio's roots during the three days spent recording eight new songs for their forthcoming LP, 'Fame Sessions,' out September 4th (Super Sonic Sounds).Writing for the album began three months prior to the trip and was heavily influenced by the historic soul and gospel music that has come out of FAME Studios. The new LP is firmly rooted in the history of southern soul music and pays tribute to FAME Studio greats like Wilson Pickett, Aretha Franklin, Duane Allman, and Percy Sledge. The result is a fresh take on a classic sound that showcases all 10 pieces of The Nightowls' ensemble, from horns and guitar to the organ and soulful vocals."Nobody But You" opens the record, introducing listeners to the full ensemble while featuring background vocals from the Shoal Sisters, Marie Lewey and Cindy Walker. Lead single "Get Up!" encourages audiences to become participants in lead singer Ryan Harkrider and the band's "dynamic, dancing-in-the-street" (Texas Music Magazine) live show while "Highline" features FAME Studios guitarist Will MacFarlane on slide guitar and pairs dark, passionate lyrics with an emotional vocal performance. "Don't Wanna Say Goodbye" highlights the interplay between the horn section and background vocalists and "Sad Sad Song" features a soaring string section. "Avalon" was written in the van on the way to the studio, tells the story of the band's journey to FAME, and celebrates the studio's southern rock legacy. 'Fame Sessions' is The Nightowls' follow-up to their 2014 debut album, 'Good As Gold', which the Austin Chronicle hailed as "suave, energetic, blue-eyed soul" and named one of the Top 10 of the year at the annual Austin Chronicle Music Awards. Austin Monthly called The Nightowls a "Band To Watch," and Texas Music Magazine called the album "a smooth addictive blend of pop, R&B and funk that will delight the band's dance-happy fans."

Here's what you say about
Nightowls - Fame Sessions.