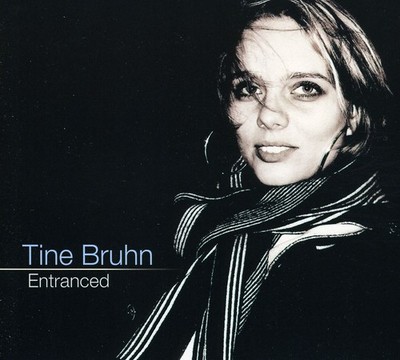 Mesmerizing, moving music for mellow moods.. Tine Bruhn explores the softer sides of jazz with a highly supportive band.. comfortable and confident.. shapes her phrases into fine work of vocal art.. Tine Bruhn contributes a joyous scat solo.. ..she sounds terrific. (JazzImprovNY - Dan Bilawsky, June 09) 'An auspicious debut - this is only the beginning. 'Baby Let Me Love You' is one of the outstanding tracks on the album' (ejazznews - Ed Blanco, August 09) Tine Bruhn reveals a vocal texture suggesting a cross between a soprano sax and a flugelhorn with a technique that utilizes uncanny space, economy and dynamics. Nice interplay between Bruhn and the trio. Bruhn's phrasing is nothing short of hypnotic. The tune Har Du Visor Min Vän is the perfect vehicle for Bruhn's unique voice: 'Don't talk about music with me. Let the song speak for you'. Through Tine Bruhn's crystal clear vocal timbre, they do. (Jazz.com - Bill Barnes, July 09) 'Wonderful recording, and listeners especially dig 'Tears' and 'Baby, Let Me Love You' ' (Rob Hoff, Radio Host, Jazz Flight WQLN) 'Raw, elegant, ethereal.' (The Copenhagen Voice) Tine Bruhn jazz singer extraordinaire.. Her delivery of Search For Peace is stunning! Tine brings the song to the forefront with a cogent performance. Her sidemen provide a nice Miles Davis-esque platform for Tine to ply her talents. (George Carroll, Cabaretexchange.com) Tine Bruhn has a beautiful voice that moves so softly with the music; making you feel all the emotions that the song was meant to deliver. And her delivery, is like the feeling you have right before a first kiss. The anticipation of her next note is chilling. One of her songs on her new album is titled "Close To Nothing" and if you listen to any of Tine's music, you must listen to that song. I like this lady a lot. And she is surrounded by a splendid band as well. Tine Bruhn's debut album 'Entranced' by Inenomis Records is now available on CD Baby. I must get it. (by Mike McCabe - thebestindiemusic.com) Jazz vocalist Tine Bruhn's debut album 'Entranced' is a welcoming blend of mellow, yet groove-based originals, two contemporary pieces by Joshua Redman with Tine's lyrics, songs by McCoy Tyner and Djavan, and a Swedish folk song arranged as a jazz waltz. Personnel: Maurice Brown - trumpet (Tracks 1 & 4) Daniela Schächter - piano Marco Panascia - bass Greg Hutchinson - drums Tine Bruhn moved to New York City in 2001 after having graduated from Berklee College of Music in Boston. She quickly became part of New York's jazz scene as she started singing at "Kavehaz" and has since performed at some of the city's best music venues including "The Jazz Standard", "The Cutting Room" and "55 Bar". Once a month Tine and her group of outstanding musicians perform at the well-known jazz club "Zinc Bar" in downtown Manhattan. Born in 1978, Tine grew up belonging to the Danish minority in Flensburg, Germany. At the age of 15 she founded the a cappella group 'Kvart I Fire' which gained high recognition in Denmark and Germany, especially after it's release of the CD 'Go 4 it' in 1996. The group kept an average of 3 performances a week during their high school years and they were requested at many official functions as well as private parties. Additionally Tine sang in classical choirs including the highly renowned semi-professional youth choir "Landes Jugend Chor Schleswig Holstein" and "Jugend Kammer Chor Flensburg". Around that time she discovered her passion for jazz and started getting solo gigs. In Boston she continued performing in a cappella settings, one of them being the 'Vocal Jazz Ensemble' under the direction of Sharon Broadley-Martin, a Vox One member. She studied with Sheryl Bentyne (Manhattan Transfer), Walter Beasley, recording artist, Richard Evans, Grammy award winning arranger, and legendary scat educator Bob Stoloff. In April 2009 the Tine Bruhn Quartet was on tour in Europe where they played at sold out venues such as "B-Flat" in Berlin. The Tine Bruhn Quintet will be on tour in Europe in October 2011 and a tour in November 2012 is in the planning.

Here's what you say about
Johnny O'Neal - Entranced.