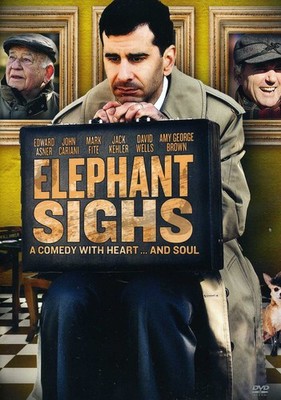 After moving to a small, rural town, uptight Joel Bixby (Tony Award-nominee John Cariani, Showtime, Kissing Jessica Stein), is invited by an agreeable new acquaintance to join a group of townsmen who meet in a ramshackle room at the edge of town. Normally a loner, Joel finds himself enamored by boisterous, fast food connoisseur Leo Applegate (Emmy- and Golden Globe-winner Edward Asner, Up, Elf, TV's Lou Grant and Mary Tyler Moore) and reluctantly agrees to go. Unknowingly the replacement for a beloved member who recently passed away, Joel meets the group's other surviving members and is swept up in their strange lives, but struggles with their secretive purpose for gathering - until he realizes each of them is as lost as himself. Gleeful Dink (Jack Kehler, Men in Black II, the Big Lebowski), who deeply loves his bald wife, is in touch with his feminine side; Perry (David Wells, Basic Instinct, Star Man, Beverly Hills Cop), a former minister, is suffering a crisis of faith; and volatile Nick (Mark Fite, Fight Club, Godzilla, Independence Day), who lost his job and family, also seeks a miracle. As the men grapple with their worries and unraveling lives, Joel finally learns their mysterious purpose.

Here's what you say about
Elephant Sighs.