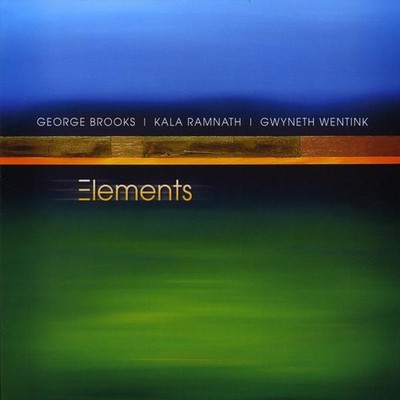 Elements presents the unique talents of American saxophonist and composer George Brooks, north Indian violinist and vocalist Kala Ramnath and Dutch harp virtuoso Gwyneth Wentink. This distinctive trio performs George and Kala's original compositions and contemporary settings of traditional Indian ragas, unifying the aesthetics of the European classical, Indian classical and American jazz traditions. Descended from an illustrious musical lineage of seven generations, Kala Ramnath is considered the leading Hindustani violinist of our time. An outstanding classical soloist, Kala has performed in major concert halls throughout the world including Carnegie Hall, Queen Elizabeth Hall, Sydney Opera House, Theater de la Ville, Tropen Theater and the Palais des Beaux Arts. In addition to her traditional work, Kala has made significant contributions as a world music innovator, collaborating with Zakir Hussain, Ray Manzarek (Doors) and performing as a soloist with African ensembles, flamenco groups, and numerous symphony orchestras including the London Symphony and London Philharmonic. She is the founder of the group Raga Afrika, which is the first collaboration of Indian music and Afro-jazz. Kala's recordings have garnered multiple Songlines' "Top of the World" awards (2004, 2006, 2008) and she was recognized by Songlines Magazine, along with Ravi Shankar, Zakir Hussain and Ali Akbar Khan, as one of the top fifty "world music" musicians. Kala's artistic achievements have been recognized with numerous awards from the Indian government including the President's Award and the Rashtriya Kumar Gandharva Sanman. She is a disciple of vocal guru Pt. Jasraj and in addition to her violin work she is a gifted and soul stirring vocalist. Still shy of her 30th birthday, harpist Gwyneth Wentink, is already acknowledged as one of the world's foremost classical harpists. Gwyneth's prodigious talents were recognized early on by her Dutch and Hungarian musician parents. She began her harp studies at the age of five, performed for Dutch Queen Beatrix at the tender age of ten and won the coveted Israel International Harp Contest at seventeen, one of many awards including the International Nippon Harp Competition, the Gulbenkian Prize, the VCSD Classical Musicprize 'New Generation' and first prize at the Young Concert Artists auditions in New York (the first harpist in their history). Gwyneth has performed as a soloist with the Boston Philharmonic, the Orchestra Sinfonica Gran Mariscal in Caracas, Venezuela, the Israel Philharmonic, the San Diego Chamber Orchestra, The Philharmonich Orkestra of Bergen, Norway, and many more. She is the winner of the illustrious Dutch music prize and is in great demand as a chamber artist and solo performer. Since 2005 Gwyneth has been performing with flutist Pt. Hariprasad Chaurasia and George Brooks in concert halls world wide including the Lille Opera House (France), The Queen Elizabeth Hall (London), the Nehru Center (Mumbai) and the Music Academy (Chennai). George Brooks is a prolific and diverse saxophonist and composer, acclaimed for successfully bridging the worlds of jazz and Indian classical music. He is the founder of several important Indian fusion groups including Summit with Zakir Hussain, Fareed Haque and Kai Eckhardt, Bombay Jazz with Larry Coryell and Ronu Majumdarand the Raga Bop Trio with Steve Smith and south Indian guitarist Prasanna. He has performed throughout Europe, Asia and North America with India's most respected concert artists Hariprasad Chaurasia, U Srinivas, Trilok Gurtu, Shankar Mahadevan, as well as jazz, blues and pop luminaries John McLaughlin, Jaki Byard, Etta James, Talvin Singh, Ray Manzarek (Doors), the Temptations, and many others. Of particular importance are his collaborations with American composer Terry Riley, a fellow student of Indian vocalist Pandit Pran Nath, who has inspired George's approach to composition and improvisation. In addition to his acclaimed recordings of original compositions George has composed and arranged for Zakir Hussain, Yo-Yo Ma, the Mark Morris Dance Company and Merchant Ivory Productions. In 2007 he received the American Composers Forum Continental Harmony Prize commissioning him to write the music for the opera "Mirrors of Mumbai - a Tale of Modern India". In 2008 he received ACF's Northern California Commissioning grant for "Double Moiré" an evening length work featuring original beat poet Michael McClure and jazz trio. In 2010 the SFMOMA commissioned "Alphorn for Hans" as an "artist response" to the museum's new rooftop sculpture garden.

Here's what you say about
George Brooks - Elements.