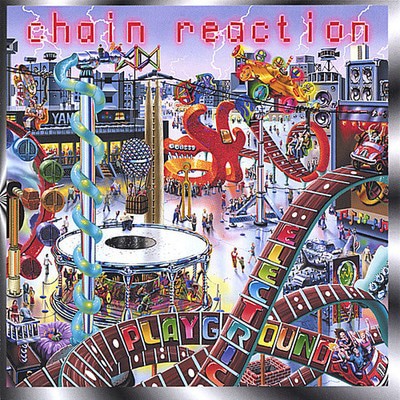 Chain Reaction is an original rock band that hails from Detroit, Michigan USA. We play a varied and engaging style of guitar-oriented music laced with elements of prog, blues, classic pop melody/harmony, funk, psychedelic and hard rock. Since 1990 we have released six recordings, beginning with 'Sonic Motion'(1990), 'Out of the Ruins'(1991), 'High Noon'(1992), 'Musical Chairs'(1996), 'Out of the Dark'(1998) and the latest here 'Electric Playground'(2004). 'Electric Playground' features original artwork from New York City muralist/painter/graphic artist Rick Klemann, who has done commercial designs for Ibanez Guitars and album covers for prominent NYC band The Lizards, among many other projects. This eight song release was produced by Bob Drozdzewski with digital mixing and mastering at Talent Live Studios by Rick Young, who has worked with Rare Earth, Merrill Osmond, Mickey Strange,Kenny Olson (Kid Rock's guitarist) and members of the Detroit Symphony Orchestra, among many others. 'Electric Playground' spotlights six original compositions penned by lead vocalist/guitarist Eric Harabadian, who is also a prominent international music journalist for publications like Downbeat, Jazz Times, Music Connection, Goldmine and the Detroit Free Press, among many others. The lead-off track 'Shallow Valor' adresses the dark side of fame and features a driving groove with insightful lyrics and some instrumental twists and turns.'Burnin' Midnight Oil' is one that should appeal to the psychedelic/jam band crowd with a swirly tripped-out guitar solo by Bobby D.'The Party Principle' is an updated version of our tune from the original EP 'High Noon' and harkens back to a Pink Floyd meets Hawkwind kind of vibe. 'If you Only Knew' is a heartfelt ballad about love lost and spotlights clear vocal phrasing and jazzy leads from Eric Harabadian. 'Honey Child' is another original that is pure funky blues and 'Where's the Beauty' is an epic hard rock/prog kind of song with wonderful backing vocals by Detroit gospel/jazz greats Gail Barker and Corrie Hix. As a bonus there are two cover songs on the album, namely a faithful and scorching version of Cream's 'White Room' and a Hendrix-inspired solo rendition of 'The Star Spangled Banner' by lead axeman Bobby D, dedicated to our troops serving overseas.

Here's what you say about
Chain Reaction - Electric Playground.