Wind Soloists of the Oslo Philharmonic - Music for Winds 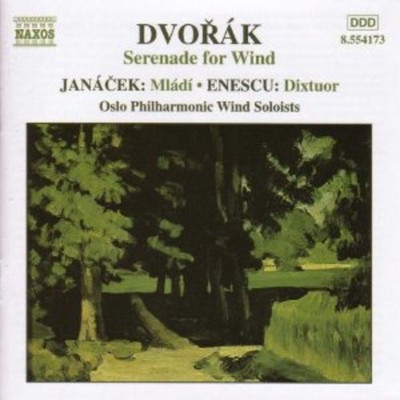 Dvorák's life was mainly a fairly contented existence despite the upheavals of nineteenth century history taking place around him. Nowadays he is chiefly remembered internationally for his later symphonies and chamber works and the valedictory Cello Concerto which he composed, together with the famous New World Symphony and his fairy-tale opera Rusalka, towards the end of his life. The Wind Serenade dates from 1878, just two years before his sunny Sixth Symphony with which it shares many of it's qualities. The work opens with a march suggesting all the pomp of the local village bands that Dvorák knew so well. This is followed by a Minuetto, a title that betrays the homage to the rococo wind serenade and to Mozart, although the piece owes as much to a triple time Bohemian folk-dance as it does to the classical court dance A flowing Andante makes up the third movement before the Allegro molto finale rounds off the work with a return to the opening theme. The Romanian composer George Enescu was very different from Dvorák. The quintessentially Czech nature of Dvorák's music has no real parallels here; Enescu was more of an internationalist and spent most of his time as a performer rather than a composer, beconting a well known Bach specialist both as a conductor and as an acclaimed violinist. His life-span of nearly 75 years produced only 32 opus-numbered works and a handful of juvenilia. Born in 1881 in the Romanian town of Liveni Vima, he spent much of his time abroad and died in Paris in 1955. Apart from his own recordings as conductor and soloist, his most important works are his symphonies and the opera Oedipe. Although his output is small, he is still considered to be the founder of modern Romanian music. If Dvorák's Serenade reflects the elegance of the rococo genre, then it is easy to see the influence of Bach in Enescu's Dixtuor. The three movements are scored for ten wind instruments as is the Dvorák but there is a more international feeling about the music despite a nod to the pipes of the composer's native Romania in the final part. The Dixtuor received it's first performance in Paris in 1906. The music of Janácek is nowadays widely played and his operas are some of the staple elements of international theatres, yet, this was not always the case. It is not too long ago that his declamatory style and odd rhythms put him in the class of 'difficult' composers. That much of his music is vocal or operatic and written in the Czech language meant problems at least linguistically in exporting his works. Janácek was not just an optimist, but also a patriot for the Czechoslovak cause and a dedicated pan-slavist and admirer of Russian culture. Born in 1854 in Hukvaldy in Moravia, the fifth of the nine children of the local schoolteacher, Janácek is remarkable in not having reached his musical maturity until the composition of his opera Jenufa which took him nine years to write between 1894 and 1903 and which, although performed in Brno in 1904, made Janácek's fortune only when it opened in Prague in 1916. The major works of his maturity now streamed from his pen as he found love, albeit unreciprocated, late in his life with the young Kamila Stösslová to whom he wrote over 700 letters. One of the products of this genuinely new-found youth was the wind sextet Mládí (Youth) written for his own seventieth birthday in July 1924, only four years before his death, The piece is consciously based on the composer's own youth when he was a chorister in Brno and pupil of Pavel Krížkovský and in the third movement, Vivace, it quotes from his March of the Blue Boys. The Moravian folk melodies of the work's four movements come from the area of Janácek's birth and have a melodic quality not found in all of the composer's music. Beginning with an Allegro in Rondo form, there follows a slow movement theme and variations in D flat. Then comes the Blue Boys March with it's echoes of the composer's own youth and finally the Allegro animato returns to the opening themes of the work.

Here's what you say about
Wind Soloists of the Oslo Philharmonic - Music for Winds.