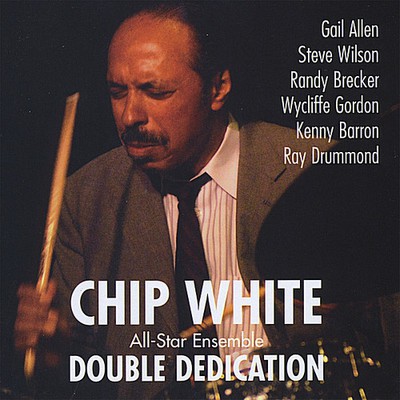 Double Dedication This recording is dedicated to 13 wonderful jazz greats, catalysts who inspired me to become a musician. It is a 2-disc set. The music I wrote for them (on Disc 1, cuts 1-13 on this page) attempts to capture the ambiance of each artist. The poems (on Disc 2, cuts 14-26 on this page) are selections from more than 100 in my book, 'I'm Just the Drummer in the Band,' which features musicians from Jelly Roll Morton and Louis Armstrong to Miles Davis, John Coltrane, Bobby Hutcherson, and Joe Henderson. Some of the musicians were ahead of my time, and I therefore heard them and studied them on recordings, others I was very fortunate to hear live, and still others I have been lucky enough to play and or record with. Here are three examples of how they encouraged and motivated me. Dedication - Max. While I was in high school, I was introduced to Max Roach by my cousin, author, playwright, and activist Alice Childress. He and his wife Abby Lincoln took me to the Village Gate in New York City, where he introduced me to Dizzy Gillespie and Charles Mingus who were both playing there with their bands. It was my first encounter with such great musicians, and they made it feel perfectly natural - an amazing experience I'll never forget. Dedication - Trane. Later that same year, at the original Birdland, I heard John Coltrane with his classic ensemble featuring McCoy Tyner, Jimmy Garrison, and Elvin Jones on piano, bass, and drums. I had thought I was serious about music before then, but when I heard Trane practicing during the intermission I had an epiphany. The concept of stream of consciousness took on a new and deeper meaning. Dedication - Etta. In 1992, I was very fortunate to join the Houston Person and Etta Jones Ensemble, and for nine years had the pleasure of working with one of the finest jazz vocalists in the business. She was also one of the nicest and warmest people I've ever met. Every gig was a lesson in swing. This recording is a Double Dedication of music and words, with lyrics on four of the tracks. Chip White Chip White began studying percussion with his father at the age of nine, and moved on to music theory and harmony with Vincent Corozine in high school. He studied with Alan Dawson, Charlie Mariano, Herb Pomeroy, and Freddie Buda of the Boston Symphony at the Berklee School of Music. He later studied orchestration and arranging with Frank Foster. "When I moved back to New York," Chip notes, "I was fortunate to live in a very significant musicians' building on 19th Street. During the 70s loft scene period, such musicians as Dave Liebman, Michael Brecker, and Chick Corea lived in the building, and I ended up in the apartment that Dave Holland vacated. This environment gave me to the inspiration to begin my career as a composer." In 1990, Chip co-wrote and produced the jazz musical 'Manhattan Moments' with choreographer Kathy Sanson. In 1994, he recorded 'Harlem Sunset' (also available on CD Baby), featuring six of his original compositions, with Gary Bartz, Robin Eubanks, Claudio Roditi, Steve Nelson, and Buster Williams. Chip's second CD, 'Music and Lyrics' (also available on CD Baby), was released in 2005. He wrote, arranged, and produced all the compositions on the recording, which features the wonderful voice of Gail Allen and the lush tenor saxophone sound of Houston Person, along with the flowing rhythm section of pianist Lafayette Harris and bassist George Kaye. Chip has performed and/or recorded with a variety of artists, including Carman McCrae, Jaki Byard, the Jazzmobile CETA Big Band, Candido, John Abercrombie, Frank Wess, Frank Foster, Frank Vicari, John Faddis, Chet Baker, Bill Hardman, Junior Cook, Claudio Roditi, Dave Liebman, James Moody, Tom Waits, Kim & Marion, Enrico Rava, Jimmy McGriff, Mulgrew Miller, Gary Bartz, John Hicks, Walter Bishop Jr., Ronnie Matthews, Al Grey, Benny Powell, Teddy Edwards, Craig Handy, Klaus Ignatzek, Houston Person and Etta Jones, Irene Reid, and Savion Glover. He has toured extensively throughout the United States, Canada, the Caribbean, Europe, and Japan. The Chip White Ensemble has been performing in various configurations around the greater New York area for the past several years. Performances often also include a poetry reading. "With this recording," Chip says, "I hope to bring my music, lyrics, and poetry to a larger national and international audience."

Here's what you say about
Chip White - Double Dedication.