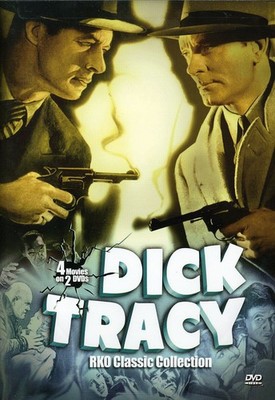 The comic-strip crime-fighter Dick Tracy, created by Chester Gould, was part of the Saturday matinee serials, starring Ralph Byrd. In 1945, RKO revived the Tracy series, and Morgan Conway was chosen to portray Tracy in a pair of feature films: Dick Tracy and Dick Tracy vs. Cueball. RKO's earliest publicity photos posed Conway in profile, hoping to imitate Gould's square-jawed caricatures. Although Conway's' screen Tracy didn't resemble the print Tracy in the flesh, Conway's dramatic interpretation was faithful; he gave the role a humble, businesslike quality while keeping with police procedure. Morgan Conway is considered by many to be the best on screen Dick Tracy. Although Conway's Tracy was praised by critics as the closest to Gould's original concept, the public seemed to prefer Byrd, who returned in the role for the final two RKO features. To them, Ralph Byrd was Dick Tracy. RKO accepted this and hired Byrd to finish the series. Dick Tracy's Dilemma and Dick Tracy Meets Gruesome. Boris Karloff spices up the final RKO feature as the fearsome bad guy known as Gruesome. All four movies had many of the visual features associated with film noir: dramatic, shadowy photographic compositions, with many exterior scenes filmed at night. In addition, RKO stocked the films with familiar faces, creating a true rogues' gallery of characters. Max Allan Collins - who took over the writing of the TRACY strip from Chester Gould, and went on to create ROAD TO PERDITION - provides informative on-screen introductions to each film, exclusive to this VCI release. DICK TRACY DETECTIVE: Tracy, in his inimitable fashion, brings to justice a psychotic, scar-faced, thug known as "splitface" who has been busy bumping off the members of a jury that once convicted him. After many intriguing and suspenseful situations, the criminal is tracked down by the master detective, Tracy, and his faithful side kick, Pat Patton. 62 minutes / 1945. DICK TRACY vs CUEBALL: A braided cord is his only clue as Tracy (Conway) searches desperately for a gang of jewel thieves. Following a trail of murder, violence and robbery, Tracy tracks down the bald-headed leader known as 'CueBall', who has a penchant for strangling his victims. 63 minutes / 1946. DICK TRACY'S DILEMMA: Tracy must track down a murdering fiend called 'The Claw'. The tension builds to a shocking climax as Tracy solves one of his most difficult cases ever. Fun and exciting! 60 minutes / 1947. DICK TRACY MEETS GRUESOME: Violence and armed conflict provides the background. Boris Karloff is great as the criminal, Gruesome, who can hold people in suspended animation with his nerve gas. 65 minutes / 1947. TRT: 250 minutes.

Here's what you say about
Dick Tracy: RKO Classic Collection.