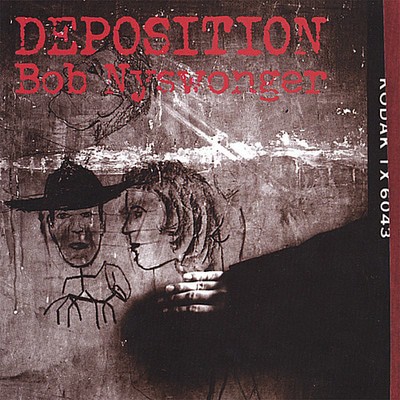 For the majority of his three-decade career, Bob Nyswonger has been best known for his influential role as the bassist and a singer-songwriter for three of the Cincinnati area's most legendary and adventurous rock acts: The Bears, Psychodots and The Raisins. The groups share line-ups featuring combinations of Nyswonger, guitarists/vocalists Rob Fetters and Adrian Belew, and drummer/vocalist Chris Arduser. Their playful and intelligent lyrics, superb musicianship and inventive arrangements have garnered them significant regional acclaim, as well as several stints in the national media spotlight. Currently, Psychodots and The Bears are part-time entities that their members engage in between individual projects. Nyswonger is no exception, having just launched his first solo album Deposition. The eclectic disc features a variety of songs Nyswonger had penned over the years that didn't quite fit into any of his group contexts. It's 11 tracks are comprised of addictive power pop cuts, raucous rockers, flickering ballads and the occasional ambient excursion. Nyswonger handles all of the lead vocals and plays most of the instruments, including guitars and keyboards. Arduser, Fetters and Belew, along with fellow Cincinnati mainstays drummer Bam Powell and singer-songwriter Lee Rolfes also contribute to the disc. Nyswonger's daughter Carmen provides vocals as well. -Anil Prasad http://innerviews.org Like his psychodots and Bears buddies, Rob Fetters and Chris Arduser, Nyswonger is now a solo recording artist. The CD, titled 'Deposition,' The 11-song CD is a roundup of Nyswonger compositions earmarked for one of his bands and unreleased tracks he transformed from demos to finished cuts. Fans of the psychodots might recognize the titles 'Catherine the Great' and 'Don't Bury Me.' 'It's all over the map. It has the different styles I like, the power pop that the 'dots do, ballads and trippy stuff. The kind word is eclectic. The critical word is unfocused,' jokes Nyswonger. His bandmates' solo projects weren't necessarily the reason Nyswonger did one himself. 'There's always competition of some sort between people, but I didn't set out with the intent that it's gonna be better that those guys' records. To me a solo record is a personal statement. I just wanted to see if I could do it, to push myself to do the whole thing,' he says. Nyswonger sings lead and plays most of the instruments himself on 'Deposition' with the exception of drums. 'I've played with too many good drummers that I didn't want to hack my way through. That's one thing I don't do,' he says. -Chris Varias, Cincinnat Enquirer 5/25/06.

Here's what you say about
Bob Nyswonger - Deposition.