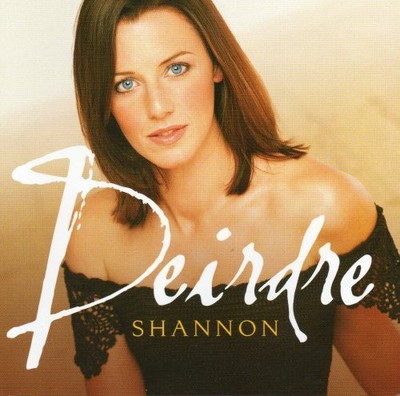 Deirdre Shannon is one of the brightest new talents to emerge on the classical Irish cross-over scene. She trained in Ireland's College of Music, and began her professional music career when she joined the exclusive Irish choir Anúna, of Riverdance fame and was featured on their album Behind the Closed Eye with The Ulster Orchestra. She was chosen by Michael Flatley to star as Erin the Goddess in Lord of the Dance and performed for more than four years in the USA, South America, Canada and Mexico to great critical acclaim. Following her return, Deirdre joined forces with the legendary Dionne Warwick on her sweeping UK tour. Deirdre's performances have placed her on some of the world's most prestigious stages, including the Royal Albert Hall (London), Concertgebouw (Amsterdam), Point Depot (Dublin), Grand Ole Opry (Nashville), Carnegie Hall and Radio City Music Hall (New York). She has featured as soloist around the American continent with the following orchestras - Cincinnati Symphony, Vancouver Symphony, Redlands Symphony, West Virginia Symphony and Toronto Symphony, soloing in Patrick Cassidy's Famine Remembrance in the Roy Thomson Symphony Hall in Toronto. In 2005/2006 Deirdre toured the US as a soloist in the hit show Celtic Woman. She left that show after a year to complete work on her album Deirdre Shannon, which has received numerous awards, including Album of The Year 2006, and Track of the Year 2006 for She Moved Through The Fair. Deirdre's television appearances include the BBC's major annual event Music Live, performing alongside Jamie Cullum, Bob Geldof, Brian Kennedy and Moya Brennan, the CBS Morning News and Fox Morning TV (USA), The Jools Holland Show and The Proms (UK), The Late Late Show, The Gerry Kelly Show and Open House on Irish television. Deirdre also recorded The Celtic Tenors' Special for PBS TV and will feature on Celtic Thunder's new upcoming DVD and PBS show. Deirdre has performed with a wide range of internationally acclaimed artists such as The Chieftains, Michael Crawford, Elvis Costello, Air Supply and The Celtic Tenors. She continues to sing with various shows - The Celtic Tenors, The Canadian Tenors, If You're Irish, Ragus and of course the much loved Irish dance show Lord of The Dance, which is currently in the Las Vegas. Keep your ears and eyes alert for this wonderful Irish vocalist!