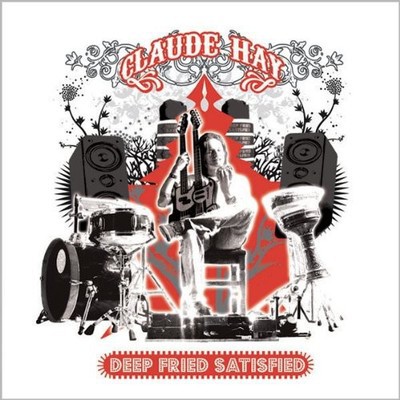 Deep Fried Satisfied, Claude Hay displays both a sure grasp of Delta blues fundamentals and a willingness to push against convention. Except for one track, this Australian guitarist wrote the songs, played them on homemade instruments and recorded them in his own studio. His slashing slide work lends a quivery sheen to "Get Me Some" (an ode to pizza) "Deep Fried Satisfied" (a warning against junk food overdose) and "Heading Home" (a bluesy valentine dedicated to his cat). Bad equipment and poor service come in for special condemnation on smoldering, funk-tinged tracks like "How Can You Live With Yourself" and "Don't Give Me That." The most surprising cut here is the hopped-up boogie treatment of Queen's "We Will Rock You"; the most serious moment is the wailing gospel lament "Miss You So," dedicated to Hay's mother. The album veers from the raga-influenced instrumental "Two Zero Seven" to the down 'n' dirty stomper "Don't Forget" without losing focus. These tracks maintain an aggressively quirky attitude while rocking with abandon. ======================================================== Vintage Guitar Feature Article Claude Hay - One-Man Oz Band is purveying the one-band band concept in a unique way with unique instruments. He played all of the instruments on his 2010 release, Deep Fried Satisfied, and performs solo, relying on a homemade double neck guitar/bass named Betty. The guitarist/singer got into the idea ...purely because my band took a break, and the bass player suggested I should go solo until we reformed. I love playing solo, and in Australia, it's a long drive between gigs, so from a logistical and financial point of view it's easier to tour as a solo artist. Once you get comfortable being by yourself onstage there's no turning back. Hays twin-neck instrument is interesting, conceptually and construction wise. Basically, the top half of it is a 251/2-scale bass guitar, he detailed. And the bottom is like a baritone. The body is an old kitchen bench top that I had lying around a nice piece of maple but I kind of regret using it now because it weighs a ton! The baritone has Bill Lawrence pickups, while the top has pickups from an import bass Hay had shelved. They're nice and old warm Fender copies from the 70s. The instrument can emulate the sound of an acoustic guitar, thanks to a L.R. Baggs piezo bridge with a built-in acoustic preamp. I wanted as many sounds and options as possible, quickly, on the fly, Hay enthused. Though it's a solidbody electric, when you plug in the piezo, you'd be hard-pressed to tell it from a Yamaha APX. It really does sound like an acoustic. Another interesting instrument Hay uses on occasion was a true wall-hanger when he acquired it. It's a half-sized sitar I scored from a party in the Blue Mountains, he recounted. It was hanging on a wall, so I picked it up and started playing slide on it. The owner said No one has ever played that. You can have it. I was so excited to discover a new sound... new to me, anyway. He wanted to use the sitar live, so it underwent modifications including new tuners and an EMG pickup. It was originally a bulb-back sitar. But thanks to the dodgy-ass baggage handlers at airports, it was smashed, so I converted it to a solidbody. I had to do a gig with it wrapped in gaffe tape, but it survived. And now it's a solidbody better live than for recording. In the studio, Hay relies on a Maton 325 acoustic, but for live gigs he counts on Betty and a Yamaha Silent Guitar. He also owns a Martin. While playing live, his right foot controls his kick drum and snare, while his left foot controls the hi-hat, tambourines, and looping. The title of Deep Fried Satisfied is a nod to American fast food, and the music reflects an Americana vibe. As might be expected from a one-man band, many songs have a thumping beat, with slower tunes having a front porch style, while the faster-tempo numbers comes across as borderline techno/ disco. The opening track, Get Me Some, is notable for both it's guitar and bass solos, played through envelope followeI'm. I'm a big fan of envelope filters, Hay said. One of my fave bass players is Bootsy Collins the envelope-filter king! He was a huge influence on me; the guy has funk oozing out of him. One of the more lyrically interesting songs Dont Give Me That, the shout-it-out chorus of which proclaim Don't give me that s**t! Hay clarified that it's actually an outraged-consumer rip-off declaration, written to recall a used-car purchase gone bad. The sole cover on Deep Fried Satisfied is a highly modified techno-rap version of Queens We Will Rock You, which has an interesting vocal mix made to sound lyou'reoure hearing them through cheap radio speakers. If I do a cover, I have to make it my own, Hay explained. If that means turning it inside out and upside down, so be it. Hay toured Australia to promote the new album, and did a radio promotional tour in America in October of 2010. He is slated to return to the U.S. in March, and hopes to check out vintage instruments when he gets back to America. Boy, do the stores there have the most awesome collections of vintage amps and guitars, he enthused. I have seen so many things I want that you just can't get here in Australia. Willie G. Moseley.

Here's what you say about
Claude Hay - Deep Fried Satisfied.