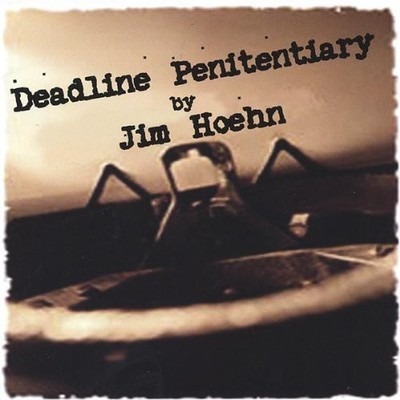 'Deadline Penitentiary' is the long-awaited new CD from Milwaukee journalist/author/songwriter Jim Hoehn, described by one newspaper reviewer as 'a master of the rowdy tall tale rendered with novelistic detail.' Recorded at Third Coast Studio in Port Aransas, Texas, 'Deadline Penitentiary' includes 10 new original songs featuring some of the best musicians Austin has to offer. Bolstering Hoehn's well-known, if somewhat skewed, lyrical style are John Inmon on guitar and Bob Livingston on bass, for many years the heart and soul of Jerry Jeff Walker's Lost Gonzo Band; two-time Grammy Award-winner Floyd Domino (Asleep At The Wheel, George Straight) on piano and keyboards; and Zack Taylor on drums and percussion, brought together under the studio guidance of Larry Joe Taylor. For a career journalist with a musical philosophy of six strings, five fingers, three chords, no problem, Hoehn has carved out a successful niche as a late-blooming performing songwriter. Since first stumbling out of the pressbox, Hoehn has maintained a time-available schedule of dates throughout the Midwest and across the country, drawing an eclectic audience of sportswriters, rugby players, Parrotheads and the occasional normal person. Hoehn has opened for a veritable who's who of American songwriters, including Jerry Jeff Walker, Don McLean, Robert Earl Keen, Junior Brown, Todd Snider, Jack Ingram, Warren Zevon, the Nitty Gritty Dirt Band, Steve Forbert, Kinky Friedman, Roger McGuinn, David Wilcox, Charlie Robison and James McMurtry. His songwriting has led to performances at prestigious music festivals hosted in Texas and Oklahoma by the likes of Gary P. Nunn and Larry Joe Taylor and an appearance on the Mitch Albom national TV show. He has appeared at numerous Parrothead phlockings such as the annual Meeting of the Minds in Key West; Pardi Gras 2003 and 2004 in New Orleans; the 'It's Midnight And I'm Not Famous Yet' party in Las Vegas; RACAfest in Cincinnati; and annual 'This Hotel Room' gathering in Minneapolis. His recordings include 'Playa del Pressbox' and 'Live at RACAfest' as well as Volumes I and II of 'Thongs In The Key Of Life,' a compilation of tropical music by the best writers on the sunburn circuit, which he produced. Hoehn also is the author of the award-winning book, 'The Father's Guide to Birth, Babies and Loud Children,' and the host of the monthly radio show, 'The Three-Chord Barbecue' on Radio Margaritaville. As a purveyor of six-string propaganda, he's probably not destined for Letterman or Leno anytime soon, but then again, he's not bad ... maybe even worth the price of a babysitter.

Here's what you say about
Jim Hoehn - Deadline Penitentiary.