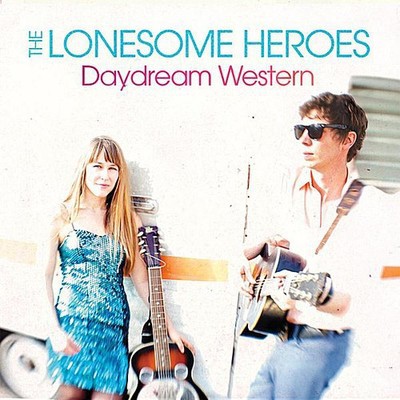 'Landry McMeans and Rich Russell formed The Lonesome Heroes in 2005. As they progressed in their songwriting, it became apparent that they weren't confined to an alt.-country comfort zone. And with the release of their new album last summer, it seemed as though the duo had written the perfect soundtrack to a faraway dream on a long stretch of highway. Daydream Western feels as though it's tailor-made for that kind of journey, sweeping across the desert, haunted by past loves.'-Laurie Gallardo - KUT Austin NPR 90.5FM 'Not the square kind of country, nor outlaw country, or even contemporary country would fit what The Lonesome Heroes from Austin bring to the stage. Reverb-heavy electric dobro underneath a playful boy-girl vocal blend from Landry McMeans and Rich Russell often pushes the indie rock quintet into psychedelia-but not without the songwriting sensibilities of classic country and folk.'-Planet Jackson Hole 'Experimenting with their big-city-meets-country-roots style, Austin, Texas, duo the Lonesome Heroes add a psychedelic twist to the standard alt-county genre but with the heartfelt poignancy and lyrical sensibility of a road-weary crooner. Their rhythmic vocals layered over acoustic guitar and reverb-heavy steel is a chance meeting between Yo la Tengo and Patsy Cline."-Flagstaff Live "The Lonesome Heroes are on a mission to make a different kind of country music. With it's Grapes of Wrath era feel soaked in reverb, you get the feeling you are listening to a long distant echo of something that once was. The drifting melancholy and bittersweet style is beyond the range of their youth, and yet it seems totally natural to them.'-The Austin Daze 'Few young artists have done as much to promote the local music scene as the Lonesome Hereos. There are touches of cosmic country and Sweetheart of the Rodeo in their psychedelic tinged, restless country tunes, but the real draw of the Heroes is excellent melding of Russell and McMeans in spirit and sound. McMeans dulcet twang and expansive dobro, and Russells' more grounded drawl and guitar combine for a mesmerizing and beautiful exchange, while their songs evoke the open west Texas expanse of road and possibilities.'-The Austin Sound 'The Heroes sad and forlorn country cry walks the dirt road from West Texas desert to a poor man's urban dwelling. Singer Rich Russell's Brooklyn upbringing marries Willie Nelson to Will Oldham on the Heroes' debut EP, and when McMeans' delicately airy voice opens up 'Oyster,' tears roll.'- Austin Chronicle 'Just when you thought country-rock's boundaries were maxed-out, Austin's Lonesome Heroes added a psychedelic-indie edge defined by reverb-soaked electric dobro and the songwriting duo of Rich Russell and Landry McMeans. Evidence of restless honesty and a road trip never quite ends, the free-spirited Heroes are a diamond in the saturated buffet of what people are calling country these days.'-Planet Jackson Hole.

Here's what you say about
Lonesome Heroes - Daydream Western.