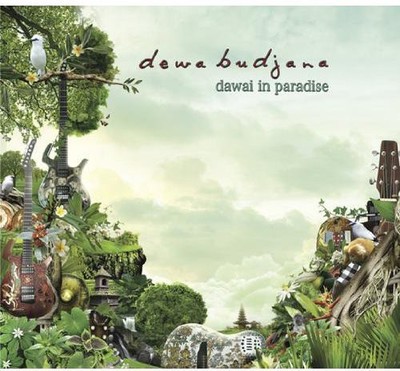 Dewa Budjana is the most famous guitar player in his own country of Indonesia, mostly due to his leadership in one of the country's top pop-rock bands, GIGI. Dewa Budjan, based in the capital city of Jakarta, hails from the exotic Indonesian Island of Bali. "Dawai in Paradise" (Dawai in Balinese language means "strings", but also "guitar') is an appropriate comment on the surroundings of his magic birth place. While the work of Dewa Budjana may be unfamiliar to the outside world, he has garnered quite a reputation as a giant in his own land in both pop-rock and jazz-fusion world. His jazz, fusion and progressive rock influences are John McLaughlin, Pat Metheny, Jeff Beck, Allan Holdsworth, Gentle Giant, Yes, Chick Corea and Weather Report. "Dawai in Paradise" is Dewa Budjana's fifth solo album as well as his international record debut, and on MoonJune Records. Beyond Budjana's furious technical abilities displayed though out the release, there is a constant grounding in his spiritual origins that take him to where, as one of the songs says, "Back Home." 2013 will be the world break out year for this artist who will have two more albums on MoonJune Records, with stellar line-up, one album recorded in Los Angeles in July of 2012 featuring jazz and fusion luminaries such as Bob Mintzer, Jimmy Johnson, Larry Golding's and Peter Erskine, and another one, a power trio with Jimmy Johnson on bass and one of the world's greatest jazz and rock drummers, Vinnie Colaiuta, recorded in Los Angeles as well in January of 2013. Take a major step forward this year by hearing the unique world music tweaked jazz rock of Dewa Budjana and take an inexpensive listening trip to Bali all in one sitting.

Here's what you say about
Dewa Budjana - Dawai in Paradise.