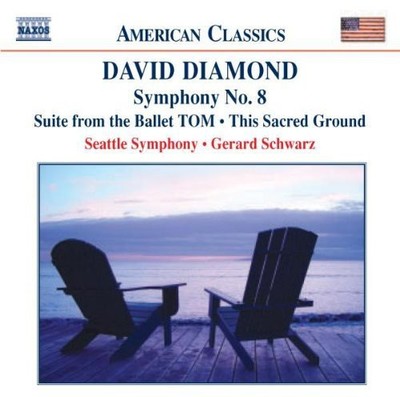 Diamond dedicated his Symphony No. 8 to his friend and mentor, composer Aaron Copland on the occasion of his sixtieth birthday. The work was completed in November 1960 and received it's première with Leonard Bernstein and the New York Philharmonic on 27th October, 1961. While essentially tonal in harmonic language, Diamond incorporated highly chromatic elements and even a twelve-note tone row, not unlike what the Symphony's dedicatee was doing during this same period in his Connotations, though Diamond's work is far less aggressively dissonant in overall sound. The composer provided these notes for the première performance: I. Moderato-Adagio-Allegro vivo. The basic row is proclaimed in the very opening bars of the introduction; it is in two halves. The first, a forceful rhythmic theme of five notes (4/4), is thundered out by the orchestra tutti. The second, a more lyric theme of seven notes (3/4), is sung softly by a single clarinet. Thematically, the second phrase is destined to be the more important; in fact, the row is immediately rearranged and presented by a solo horn, which starts with this second phrase in an even more lyric version, and concludes with a lyric transformation of the thundering five-note opening. The fast body of the movement, a free sonata-allegro structure, starts with a heavily syncopated version of the row as presented by the French horn. This is the principal theme; a contrasting second theme is presented at a more relaxed tempo by a solo clarinet, ben cantando, over a soft counterpart of strings. Both themes are developed, and return in very nearly their original form during the course of this long but highly concentrated movement. The conclusion is a stunning climax compounded of the essence of both themes.II. Theme (Adagio), Variations and Double Fugue. After a two-measure introduction, which turns into a sequential accompaniment, the first violins begin a high, flowing melody that is the theme (3/4). Soon the orchestral basses and cellos enter with this same melody, while the violins continue the forty-measure theme. Variation No. 1 is a canon, in which the violins lead and cellos follow with the same melody, always at a distance of one measure. There are seven variations in all, the last of which repeats a long section from No. 1, and then leads without pause into the lively double-fugue. The first principal theme of this is derived from the principal theme of the first movement. Other themes from the first movement make their appearance, too, as the Symphony moves on to it's climax and conclusion.

Here's what you say about
Gerard Schwarz - Symphony 8.