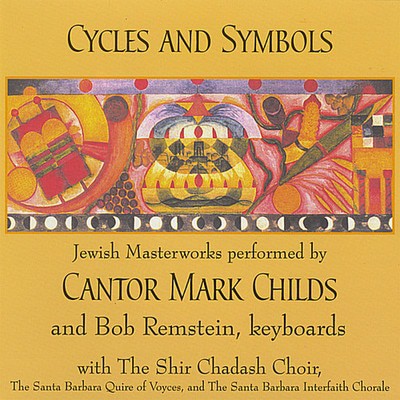 Cantor Mark E. Childs has served since 1991 as Cantor of Congregation B'nai B'rith in Santa Barbara, CA . He earned his B.A. in music from U.C. San Diego and his Master of Sacred Music degree along with an Investiture as Cantor in 1991 from Hebrew Union College-School of Sacred Music in New York City. Mark is an active touring recitalist in Jewish art song, folk song, and all vocal music of the Jewish people as well as classical and musical theater repertoire. He has appeared with the Los Angeles Jewish Symphony (Zeisl's Requiem Hebraica), the Portland Symphonic Choir (Bloch's Sacred Service), the Santa Barbara Symphony (Bloch's Sacred Service, Holdridge's American Hymn), the Santa Barbara Grand Opera (Die Fledermaus, Don Giovanni), and the Santa Barbara Interfaith Chorale (Mendelssohn's Elijah). His other recordings include "The Time for Singing Has Come" and 'The Ballad of Ruth' by Stephen Richards. Cantor Childs' worship services, educational, and cultural programming have enriched both Jew and non-Jew alike throughout the greater Santa Barbara area where he resides with his smart and beautiful wife, Shari, and brilliant and handsome sons, David and Adam. Keyboardist and composer Bob Remstein has served as accompanist for High Holidays services at Temple B'nai B'rith in Santa Barbara since 1986. He has composed several liturgical pieces, three of which are featured on this CD. Also active in popular music, Bob composed and performed Theme For the Children, an instrumental piece due out this fall on the Qwest/Warner Bros. Release Love Shouldn't Hurt. Proceeds from that album will benefit the National Committee for the Prevention of Child Abuse. In addition, he has written extensively on music and the arts for many publications, including Musician, Rolling Stone, Wall of Sound, E! Online, the Musichound Record Guide, and the Los Angeles View.

Here's what you say about
Cantor Mark Childs - Cycles & Symbols.