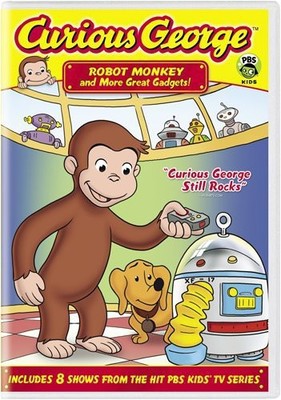 Curious George's Emmy Award-winning PBS Kids TV Series is back with more gadgets, gizmos and games than ever! In George's world, there are all sorts of things to explore and play with: toys, machines, even tools. And even better, George can use everyday things to create his own inventions! Get your imagination going with the world's most curious monkey in Curious George: Robot Monkey and More Great Gadgets! Robot Monkey Hullabaloo George creates an awesome robot outfit that's so good it fools everyone, even the Man with the Yellow Hat and Professor Wiseman. Will George end up on display at the museum's new robot exhibit? Curious George, Spy Monkey After reading his spy book "Double-Oh Doggy", George goes undercover, trying to solve the mystery of what surprise the Man with the Yellow Hat is going to buy for George. Will "Double-Oh Monkey" crack the case? Curious George Rides a Bike George loves his new bike, but when he gets the chance to help Bill with his paper route, he hits a big rock and bends his wheel. Can George find the right tools to get rolling again? Curious George vs. The Turbo Python 3000 You must be eight licorice whips tall to ride the Turbo Python 3000, and George is only seven whips tall. George looks for ways to grow and it seems to work, but are his legs longer, or is his stomach fuller? Monkey Fever the Man with the Yellow Hat has come down with a terrible cold, and George decides to nurse him back to health by setting up the bedroom like a real hospital and using his own brand of monkey medicine. The Lucky Cap George is having a terrible day. But when the Man with the Yellow Hat gives George a new cap, all George's bad luck turns good! But when the cap shrinks, can George find a way to make his own luck? Candy Counter When George helps out at Cayley's candy counter for an afternoon, he quickly learns that eating candy is easy, but counting and sorting it is much more difficult! Gutter Monkey When Mr. Zoobel's snake, Bruno, sheds his skin, George heads to the pet store for an explanation. When he returns, he finds Bruno has escaped and George must wrangle him back to where he belongs.

Here's what you say about
Curious George: Robot Monkey and More Great Gadgets!.