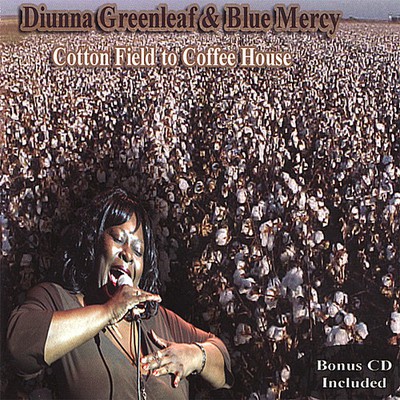 Diunna Greenleaf, the leader of Blue Mercy, is a native Texan (Houston) who has a background steeped in gospel music. Influenced by the likes of Koko Taylor, Aretha Franklin, Rosetta Thorpe, Sam Cooke, Charles Brown and her own parents Ben & Mary Ella Greenleaf (Gospel). She has developed 'Diunna's style of Blues' in the same tradition as so many other great Texas blues men and women. She combines intricate patches of jazz, gospel and heartfelt soul to create a kind of blues that takes one on an emotional roller coaster ride. Diunna and her band Blue Mercy have performed throughout the United States and Internationally. She has performed at the Lugano Blues Festival and the Bern Jazz Festival, both in Switzerland, as well as the Cahors Blues Festival in France. For the remainder of the 2008 season, Diunna is slated to do festivals in Norway, Canada, Australia, England, Italy, France, Virgin Islands and a return trip to Switzerland, as well as other performances throughout Europe, Asia and the United States. Diunna has opened for and performed with the likes of Bob Margolin, Keb Mo, Willie â€œPinetop' Perkins, Hubert Sumlin, Willie â€œBig Eyes' Smith, James Cotton, Carrie Bell, Big Bill Morganfield, Smoking Joe Kubek and Bâ€™Nois King, Anson Funderburge, Sam Meyers and the Rockets, Bernard Allison, Odetta, Rod Piazza and the Mighty Flyers, I.J. Gosey, Sherman Robertson, Kenny Neal, the late great Teddy â€œCry Cry' Reynolds, and numerous others. Diunna's commitment to Blues goes well beyond performing on stage. She served for three years as President of the Houston Blues Society, making history as the first woman ever elected to this position. During her presidency she used her professional guidance and grant writing skills to produce the Willie Mae Thornton Blues Festival, bringing in such talent as â€œThe Queen Of Blues' Mrs. Koko Taylor, Mr. Bernard Allison, Texas Johnny Brown, I.J. Gosey, Diane Price, Mel Waiters, Betty Lewis, Gary Clark, Jr., Jeremy And The Hotboys, along with many others. Diunna started the annual Houston Blues Society Founders Day and actively continued the Blues In Schools Program throughout the state. She is one of the founders of Friends of Blues Montgomery County. Diunna's most recent achievement was her win for 'Best New Artist Debut' at the 2008 Blues Music Awards in Tunica, MS. She was also nominated for 'Traditional Blues Female Artist of the Year.'

Here's what you say about
Diunna Greenleaf - Cotton Field to Coffee House.