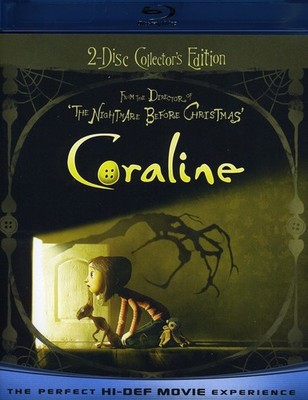 As covetous children are often warned: Be careful what you wish for. It's this very cautionary wisdom that sets the stage for Henry Selicks CORALINE, an eerily eye-popping stop-motion animation tale of fractured dreams and families made whole. As the films opens, Coraline Jones (voiced by Dakota Fanning) and her parents (Teri Hatcher, John Hodgman) have moved into the Pink Palace, a once-vibrant boarding house that's turned drab and dilapidated. As her parents work feverishly on a new gardening catalog, the bored and belligerent Coraline is admonished to explore her new worlds possibilities. Along the way she meets her fellow tenants, including two aging English showgirls and a mouse-training Russian acrobat, as well as an outcast neighborhood boy named Wybie. But it is a mysterious hidden door that most piques Coralines interest-a gateway to a parallel world where her "other" parents and neighbors live only to see Coraline well fed and endlessly entertained. All is not cakes and carnivals for Coraline, though, and the black buttons that have replaced the eyes of these otherworldly imitations hint at darker intentions. When these intentions are revealed, Cora and a friendly magical cat use their wits and willpower to defeat Coralines wicked other mother and restore balance in the real world. Based on Neil Gaimans beloved children's novel, director Selick (THE NIGHTMARE BEFORE CHRISTMAS) uses the stop-motion technique to bring CORALINE to life with amazing visual and emotional depth. The result is a frightfully magical adventure that will give the whole family plenty to shriek, cheer, and talk about. Starring: Dakota Fanning, Teri Hatcher, Ian McShane, Jennifer Saunders Director: Henry Selick Special Features: Deleted Scenes, Commentary, Featurettes.

Here's what you say about
Coraline.