Angela Hagenbach - Come Fly with Me 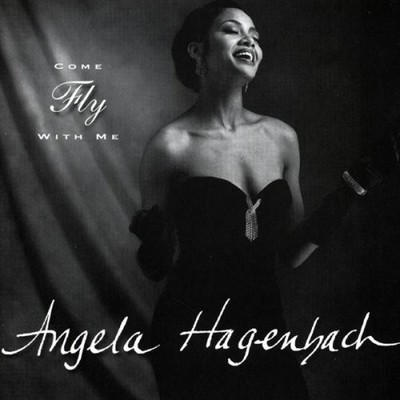 Kansas City singer/songwriter, Angela Hagenbach, is one of America's best fresh voices in jazz. Singing everything from swinging straight-ahead Jazz Standards, Blues, and original compositions to sensual rhythmic Latin Jazz. She was praised by Cadence Magazine and JazzTimes for her '...Immediately appealing voice and razor sharp intonation.' Angela's national debut recording, 'Weaver Of Dreams,' released in January 2001, garnered three stars by Downbeat Magazine, and was an immediate smash success on radio. The Grammy nominated 'Weaver of Dreams' shot to the number five position on the Gavin Jazz Chart in six short weeks. Angela is currently recording her sophomore effort featuring such jazz greats as Clark Terry and Jimmy Heath. Also appearing are Russell Malone, James Williams and Don Braden, along with her Kansas City band. Her professional music career was launched in 1990, by 1994 Angela released her critically acclaimed, debut recording ' Come Fly With Me' on Amazon Records, which Scott Yanow, LA Jazz Scene, described as 'Full of rhythmic fire.' Showcasing her Latin side, Angela released 'Angela Hagenbach and Musa Nova' in 1995. '...There is nothing more beautiful than a mixture of styles. To our delight, Angela Hagenbach & Musa Nova does it with assurance, taking advantage of every moment,' praised Sergio Mielnizenko, Producer of NPR's Brazilian Hour. Patricia Meyers, from JazzTimes applauded 'Feel The Magic,' Angela's 1997 release. 'She possesses an extraordinary range, excellent phrasing and a singular style.' After countless television commercials and print advertising, the next logical step for Angela was acting. Last year marked Angela's theatrical debut as a co-star in Duke Ellington's Sophisticated Ladies presented by the Theater League and Paseo Academy for Fine and Performing Arts in Kansas City where she won rave reviews for her performance. Angela's talents have placed her on the international stage, from The Kennedy Center for the Performing Arts to opening for Ray Charles in Marciac, France. The Angela Hagenbach Trio was chosen to tour as Jazz Ambassadors to the world under the auspices of the United States Information Agency and the Kennedy Center for the Performing Arts. The World Tour included performances and workshops in Jordan, Israel, Palestine, Oman, Uganda, Africa, Ethiopia, India, Thailand and Malaysia. In August 2001, Angela performed 'A Tribute to Louie Armstrong' with Laurent Filipe and the Cultur Porto Big Band to a SRO crowd in Porto, Portugal. Blessed with impeccable pitch, she covers her full two and a half octave range with ease, clarity and effortless agility. '...The voice of Angela Hagenbach is great in it's versatility and variety of styles, and she's fun to listen to. Make a space between your Sarah Vaughan and Shirley Horn albums for Angela Hagenbach!' __Robin Lickle Themestream.Com For more information please contact: MARIAH VAUGHAN ARTIST MANAGEMENT E-mail: [email protected] Phone: 816-891-0759 Fax: 816-891-8971.

Here's what you say about
Angela Hagenbach - Come Fly with Me.